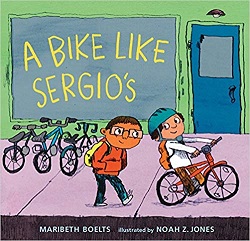 Every kid except Ruben has a bike. His best friend Sergio tells him to ask for one for his birthday, forgetting there’s a difference between their birthdays.

At the grocery store, Sergio buys a pack of football cards, and Ruben buys bread for his mother. Then a dollar falls out of a lady’s purse. Sergio doesn’t run after her because it’s just a dollar. But when he gets home, he discovers it’s actually a hundred-dollar bill. Which is enough money to buy a bike.

So – it’s a story about making the hard decision to give back found money. It’s very well done, showing the range of emotions – dreaming about the bike, but not looking at his parents. He watches his mother cross things off her shopping list because they can’t afford them. There’s a part where he thinks the money is gone, and all the emotions that brings.

When he finally gets up the nerve to give the money back, I like that the woman doesn’t offer to buy him a prize. She thanks him and tells him he’s blessed her.

When Ruben tells his parents the whole story, they tell him they’re so proud. And Ruben is proud of himself, too.

This book has a message – but the message is palatable because it tells a good story, a story about a boy who feels real and whose reactions are true to life. I do hope Ruben gets a bike some day! And for kids who’ve never had to do without, this book may be eye-opening, too.

Find this review on Sonderbooks at: www.sonderbooks.com/Picture_Books/bike_like_sergios.html