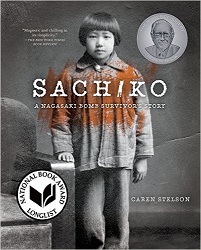 This book is what the title says it is: The story of a survivor of the Nagasaki atom bomb.

Sachiko Yasui was six years old when the bomb fell on her city. The book first sets the stage, briefly explaining how the war was going and American attitudes toward the Japanese at the time. Throughout the book, background information is inserted with spreads on darker-colored pages, so it’s clear they are background. But we’re given a detailed, hour-by-hour account of what happened in Nagasaki on August 9, 1945.

Of course Sachiko and her family lost their home. But one by one, she also lost all her family members.

The first to die was her two-year-old brother, who had a wooden stick go through his head in the initial blast. All of the girls Sachiko was playing with at the moment the bomb went off also died. Her other two brothers took longer to die of radiation sickness.

Fortunately, Sachiko had her parents to take her out of the city and to help her survive and to put her in school. Though years later, it was cancer that took their lives, a result of the radiation from the bomb.

Sachiko herself suffered from radiation sickness and was bullied in her new school because she lost her hair and had scaly skin. I do like the way the author weaves in stories of those who inspired Sachiko: Her father revered the teachings of Gandhi; Sachiko got to see Helen Keller when she visited Japan; and she was impressed by the teachings of Dr. Martin Luther King, Jr.

It was a long time before Sachiko was ready to tell her story, but since 1995, she has traveled around the world, especially speaking to students, and promoting peace.

Sachiko also tells young people that, as she was inspired by Helen Keller, she hopes to inspire them. “I’ll try to speak about how strong you can be as a human being when you encounter difficulties in the future.”

This book is illustrated with plenty of photographs and presents a powerful and important story, in a way that young people can understand and that will move anyone’s heart.

May her words be true: “What happened to me must never happen to you.”

Find this review on Sonderbooks at: www.sonderbooks.com/Childrens_Nonfiction/sachiko.html