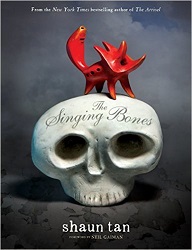 This is a book of art. But all the art is based on fairy tales from the Brothers Grimm. Shaun Tan has created sculptures based on the tales. On each spread, there’s a short excerpt from the featured fairy tale on one page, and a photograph of the sculpture on the other page.

In the Afterword, Shaun Tan tells us about the sculptures:

The main materials I’ve used are papier-maché and air-drying clay, carved back and painted with acrylics, oxidized metal powder, wax, and shoe polish. The resistance of clay in particular at a small scale encourages simplicity, especially where the key tools are blunt fingers and thumbs: Faces and gestures are abbreviated, just like characters in the tales themselves. The concept of a thing also becomes more important than a detailed likeness: A fox need only be a few red triangles, a sleeping man requires no body, and a queen’s face can be eroded away by the force of a single, elemental feeling: jealousy. What matters above all else are the hard bones of the story, and I wanted many of these objects to appear as if they’ve emerged from an imaginary archaeological dig, and then been sparingly illuminated as so many museum objects are, as if a flashlight beam has passed momentarily over some odd objects resting in the dark galleries of our collective subconscious. Like the tales themselves, they might brighten in our imagination without surrendering any of their original enigma.

He achieves this feeling of simple forms, of the bare bones of the stories. As Neil Gaiman says,

Shaun Tan does something else here: something profound. His sculptures suggest, they do not describe. They imply, they do not delineate. They are, in themselves, stories: not the frozen moments in time that a classical illustration needs to be. These are something new, something deeper. They do not look like moments of the stories: instead, they feel like the stories themselves….

Here they gather for you, timeless and perfect, a mixture of darkness and light that manages to capture Grimms’ stories in a way that nobody, to my knowledge, has done before.

All of Shaun Tan’s work is eerie, abstract, and creepy. But combining his images with timeless folk tales gives them whole new power.

In short, you really need to see these images. Check out this book and take a look!

Find this review on Sonderbooks at: www.sonderbooks.com/Childrens_Nonfiction/singing_bones.html