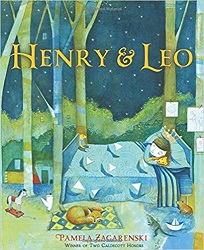 Pamela Zagarenski’s lush and detailed illustrations have taken some time to grow on me, but by now I love them. She’s consistent with some interesting quirks – characters so often wear a crown, sometimes hovering over their heads as if imaginary. I think of the characters as regal that way.

This is a story of a boy, Henry, and his stuffed lion, Leo.

Henry could never say exactly what it was that made Leo different. Perhaps it was his glass button eyes, which made him look as if he knew secret things. Or maybe it was his jointed and movable parts. I guess we can never really know what makes one particular toy more special than another. But from the moment Leo was given to Henry on his second birthday, the two were inseparable.

Henry’s sister thinks Leo isn’t real, but Henry knows better. When his family goes for a walk in the woods, Henry gets tired and accidentally leaves Leo behind. They don’t discover he’s missing until nightfall.

Henry insists they leave a light on for Leo, even though his mama explains that Leo is not real.

Then we see several wordless spreads of what happens that night in the woods. Many forest animals (all with crowns above their heads) including a large bear help Leo find his way home.

In the morning, Henry finds Leo close to the path right outside the front door. His sister and father looked there the night before, but Henry knows how Leo got there.

It’s a lovely warm book about friendship, with so much to notice and wonder about in the illustrations.

Find this review on Sonderbooks at: www.sonderbooks.com/Picture_Books/henry_and_leo.html