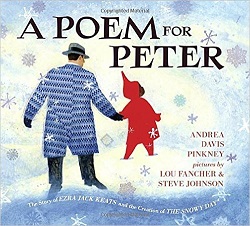 A Poem for Peter

This is a picture book biography — in poetry form. And the narrative poem is written addressing Peter, the hero of the classic picture book The Snowy Day.

We’ve got all the details of Ezra Jack Keats’ life. His parents were immigrants from Poland, and he grew up in Brooklyn, knowing about poverty and discrimination. Even as a child, he wanted to be an artist, and his father found ways to get him paints. There are a couple of special pages when he discovered the Brooklyn Public Library.

It tells about the art scholarship he won and had to give up when his father died of a heart attack, then about his struggles finding work during the Depression — eventually getting to work as an artist with the Works Progress Administration. Then he served in World War II, but after the war had to change his name from Jacob Ezra Katz to sound less Jewish in order to get work.

When Ezra started writing and illustrating picture books, he’d noticed there weren’t many picture book scenes like those in his Brooklyn neighborhood, nor many children who looked like his neighbors.

I especially like the pages when Peter is created and the book is born.

Peter, child,
you brought your stick.
Yes, you did.
Smack-smacked at a tree.
Some say you were whacking
at ice-packed intolerance,
shaking it loose from narrow-
minded branches.

When prejudice fell,
you rolled it, packed it,
put its snowball in your pocket
of possibility,
where it melted away.

Peter and Ezra,
you made a great team.
Together you brought a snowstorm
of dreams.
A blizzard of imagination.
Flurries of fun!

And soon readers called for
more of where are you?
And between you two,
the one-of-a-kind snowflakes
kept falling.
Onto sweet pages
of brown-sugar good.

More neighborhood friends.
More books with kids who
answered where are you?
with here we are!

The art is lovely as well, with many images of Peter straight out of Ezra Jack Keats’ work and lovely snowflake pictures, as well as a variety of images illustrating Ezra’s life.

Find this review on Sonderbooks at: www.sonderbooks.com/Childrens_Nonfiction/poem_for_peter.html