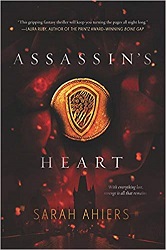 I did not expect to enjoy this book as much as I did. Come on, it’s about a girl assassin, from a family of assassins. The plot of the book is about finding vengeance.

Not long after the book opens, Lea’s entire family is murdered, burned to death in their sleep, because of a betrayal. I read the start of the book before going to sleep — and woke up the next morning to some pretty depressing thoughts!

But I wasn’t ever tempted to stop reading the book. Despite its dark subject matter, this is good writing and compelling characters.

The world of the book is innovative and unexpected. The nine Families of clippers (assassins) in Lovero serve the goddess Safraella by accepting contracts to kill people. That is also how they keep order in Lovero. If someone pays for someone else to be killed without a good reason, they can be sure their own death will be next. The kingdom accepts this service and doesn’t interfere in matters between the Families.

As part of the service, clippers place a gold coin in the mouth of those they kill.

The coin would act as a balm and prevent the man from becoming an angry ghost, because it signaled that the person deserved a quick rebirth. Instead of wandering the dead plains, Safraella, goddess of death, murder, and resurrection, patron of Lovero, would see the offering and grant him a faster return to a new life. A better life.

Ever since the king of Lovero devoted himself and the kingdom to Safraella, angry ghosts stay out on the plains outside the kingdom. Now Loverans can go out of their homes at night without fearing their souls will be pulled out of their bodies.

But because the Families are outside the law, Lea Saldana has nowhere to turn when her whole family is killed in the fire. She knows the Family that did this will try to hunt her down once they learn she survived. She needs to find her one living relative, an uncle who was banished from the Family years ago. Of course, that will mean crossing the dead plains, filled with angry ghosts. And then somehow finding her uncle, who has gone deep into hiding.

Besides being a compelling story (even if it did had a lot of death and gore), this book also had some twists and turns I didn’t see coming. There’s also romance — and I always have a soft spot for a romance that shows true character in the beloved, someone who’s more than a handsome face.

Find this review on Sonderbooks at: www.sonderbooks.com/Teens/assassins_heart.html