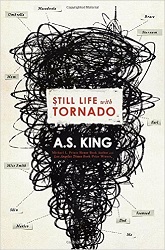 Wow. This book is original.

And that’s saying something. Here’s how the book begins:

Nothing ever really happens.

Or, more accurately, nothing new ever really happens.

My art teacher, Miss Smith, once said that there is no such thing as an original idea. We all think we’re having original ideas, but we aren’t. “You’re stuck on repeat. I’m stuck on repeat. We’re all stuck on repeat.” That’s what she said. Then she flipped her hair back over her shoulder like what she said didn’t mean anything and told us to spend the rest of class sorting through all the old broken shit she gets people to donate so we can make art. She held up half of a vinyl record. “Every single thing we think is original is like this. Just pieces of something else.”

Two weeks ago Carmen said she had an original idea, and then she drew a tornado, but tornadoes aren’t original. Tornadoes are so old that the sky made them before we were even here. Carmen said that the sketch was not of a tornado, but everything it contained. All I saw was flying, churning dust. She said there was a car in there. She said a family pet was in there. A wagon wheel. Broken pieces of a house. A quart of milk. Photo albums. A box of stale corn flakes.

All I could see was the funnel and that’s all anyone else could see and Carmen said that we weren’t looking hard enough. She said art wasn’t supposed to be literal. But that doesn’t erase the fact that the drawing was of a tornado and that’s it.

Sarah is having an existential crisis. She stops going to school. Her parents don’t know what to do, and they don’t know where she goes.

In chapter two, she’s planning to go to City Hall and change her name to “Umbrella.” But this happens:

A woman walks up and sits down next to me in the bus shelter. She says hello and I say hello and that’s not original at all. When I look at her, I see that she is me. I am sitting next to myself. Except she looks older than me, and she has this look on her face like she just got a puppy — part in-love and part tired-from-paper-training. More in-love, though. She says, “You were right about the blind hand drawings. Who hasn’t done that, right?”

I don’t usually have hallucinations.

I say, “Are you a hallucination?”

“Why do you look so happy?”

“I stopped caring about things being original.”

They help Sarah — and the reader — piece together what happened to her and what that means. And what sort of tornado has taken over her life.

A lot hinges on that trip to Mexico that is still fresh in the mind of 10-year-old Sarah. That was the last Sarah saw her older brother Bruce.

We also get a peek into the mind of Sarah’s mother, an E. R. nurse who doesn’t love her husband. They’re staying together for the sake of Sarah. And the effect is that Sarah is growing up surrounded by lies.

I haven’t been able to convey the power of this book. It’s a straight contemporary novel — except that 16-year-old Sarah converses with her 10-year-old, 23-year-old, and 40-year-old selves — and other people interact with them, too, so they are indeed not hallucinations.

This is a powerful story about what happens when a metaphorical tornado goes through a seemingly still life — that was really swimming in lies.

(Tip: If you believe a woman should stay in an abusive marriage for the sake of the kids, this book will not support your views.)

Find this review on Sonderbooks at: www.sonderbooks.com/Teens/still_life_with_tornado.html