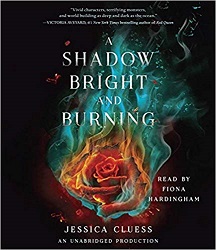 A Shadow Bright and Burning

This is alternate history Victorian England, read with impeccable English accents, reflecting class differences in the accents (even though I wouldn’t know the difference if I hadn’t heard it.)

Henrietta Howel has always hidden her ability to set things on fire and burst into flame without burning. So when a sorcerer comes to the school where she grew up and now teaches, she works hard to keep from flaming out. It turns out the sorcerer is looking for a girl with power over flame not to execute her as a witch, but to fulfill a prophecy about a woman from sorcerer stock who will save the country.

When the Ancients attack that night — seven great horrific spirits from another dimension who have been attacking England for years — Henrietta’s powers are revealed. But she is brought back to London to train as a sorcerer. She discovers a different world than the one where she grew up.

Henrietta’s one requirement is that she must bring Rook with her — a boy who is “Unclean,” marked by scars from an attack by one of the Ancients, Korazoth. Rook and Henrietta have always looked after each other. The sorcerer is willing to take him on as a stable boy — anything to get Henrietta to train with the sorcerers.

She’s up against a lot in London. She’s out of her depth with society. And she’s training in a house full of boys. She must master her powers in order to be commended by Queen Victoria and become an official sorcerer. And then she meets someone who says he knew her father. And she has grave doubts as to whether she really is the prophesied one. But if she isn’t, she’ll lose everything.

There are layers within layers in this book, but it never gets too complex to follow. I am delighted that there is more to come — the back of the book says it’s Book One of The Kingdom on Fire. The author develops a complicated world here with sorcerers, magicians, and witches — and powerful beings besieging England who destroy humankind and take people as their familiars. And in the middle of all that, you’ve got Victorian England trying to keep women in their place and a girl trying to figure out what that place is for her.

This book is imaginative, suspenseful, and gripping. The narrator’s voice and delightful British accent ensured that my commute was enchanting as long as I was listening to this book.

Find this review on Sonderbooks at: www.sonderbooks.com/Teens/shadow_bright_and_burning.html