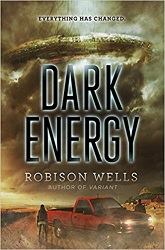 Dark Energy is set in the near future. Aliens have landed, well, crash landed, in Minnesota, after skidding through Iowa. Alice Goodwin’s Dad is director of special projects for NASA, so this news means that Alice is moving to Minnesota and enrolled in an elite private school there.

It’s actually a few weeks before the aliens emerge from their giant spaceship. When they do, they look like humans.

Naturally, there are protestors. Almost 20,000 people died when the ship crashed. The aliens don’t seem to be looking for conquest, but they also don’t seem to have special insight or knowledge capable of creating such amazing technology.

Most of the thousands of aliens are settled in a tent city, but Alice’s Dad arranges to have two of them attend her private school. Can Alice teach Coya and Suski human ways? And can she and her friends figure out what’s so fishy about their story?

This is an imaginative look at what would happen if aliens crash-landed, combined with a mystery as to what it is the aliens aren’t telling. Combined with a boarding school story and a road trip tale, with some life-or-death danger, this book is an entertaining read.

I enjoyed this paragraph, where the aliens first come out of the ship and are met by a delegation:

Still, it was apparent from the communication that the aliens were impressed with the dress uniforms of the military men, and the alien woman’s hands moved from a dangling award on one of their chests to the dangling tie around the vice president’s neck and back again. Then she noticed that the man in the back had the same kind of tie, only his was striped instead of silver, and that seemed to impress her even more. The alien man was the first to approach the woman in the business suit, and he pointed to the tiny flag pin on her lapel, and then at the many pins on the military uniforms, then the men’s ties, and he gave her an encouraging Try harder next time smile.

I liked Alice’s voice as the narrator describing all this. She’s got a sense of humor about it all and because of her Dad’s job, tends not to catastrophize one way or the other. When things take a dramatic turn for the worse, she’s level-headed and thinks through how to help her friends.

How would you feel if aliens landed?

Find this review on Sonderbooks at: www.sonderbooks.com/Teens/dark_energy.html