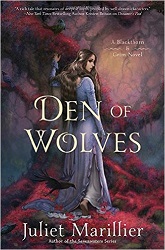 I was saving this book up to read after I finished judging books for the Cybils Award, and was happy about having a sick day this week — because I got to spend the day reading it. So my memory of the day is lovely.

This is the third book in Juliet Marillier’s series about Blackthorn, a wise woman and healer, and Grim, her giant-sized companion. Though you wouldn’t feel lost if you started with this book, to really enjoy the nuances and character growth in these books, you should start at the beginning with Dreamer’s Pool.

At the beginning of the series, Blackthorn and Grim were locked up in a nightmarish prison. Here she’s reflecting on how they escaped.

Ah, Conmael; my mentor, who was one of the fey. A mysterious stranger, or so I’d thought at the time, who had saved me from execution and released me and Grim from vile imprisonment, but only after I’d promised to adhere to his rules for seven years, gods help me. Those rules were three: I must live here in Dalriada and not go south to seek vengeance against my enemy, Mathuin of Laios; I must say yes to every request for help; and I must use my abilities only for good. To someone who did not know the angry, bitter creature I had become, that might not have sounded so hard. But it was hard. Making Mathuin pay for his crimes, not only against me but against a whole host of wronged innocents, had become the only thing that mattered to me; even more so after a year’s incarceration in his cesspit of a lockup. I had struggled to keep my promise. Twice, I had come within a hairsbreadth of breaking it, even in the knowledge of the punishment Conmael had threatened. As for saying yes when folk asked me for help, that was not always as simple as it sounded.

In each book, Blackthorn and Grim have a large case to solve for someone else, involving something uncanny. But at the same time, in each book, things come up regarding Mathuin. By now, he’s found out where Blackthorn lives and wants to eliminate her.

It turns out that this third book brings the larger story to a satisfying conclusion, but I hope this won’t be the last we see of Blackthorn and Grim. After all, Juliet Marillier continued the Sevenwaters series after the first trilogy.

But the more immediate issue in this book involves a wild man who returns to Wolf Glen after being in the Otherworld for 15 years. The landlord at Wolf Glen wants Bardan, the wild man, to finish the heartwood house that he began 15 years ago. He hires Grim to help build it, but sends his daughter away to Winterfalls. At Winterfalls, she comes under Blackthorn’s wing. Between the two of them, Blackthorn and Grim realize something is not as it seems at Wolf Glen.

I think what I love most about this series is the gradual growth and healing we get to watch happen in Blackthorn. Yes, they were both traumatized, and both still have nightmares and flashbacks. (I like that the author doesn’t pretend that just goes away.) But as Blackthorn helps people, we watch her innate kindness shine. And slowly, slowly, she learns to trust. Slowly, slowly, her heart opens again.

Grim, for his part, also shines as someone who’s kind and will give himself to help others, but especially Blackthorn. His growth is mainly in learning to value himself, and offer his common sense and great strength.

The resulting romance is exquisite.

Find this review on Sonderbooks at: www.sonderbooks.com/Fiction/den_of_wolves.html

Source: This review is based on my own copy, pre-ordered via Amazon.com.