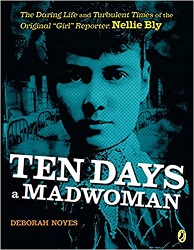 Despite the title, this is a complete biography of Nellie Bly for middle grade readers. The episode where she infiltrated an insane asylum for ten days is the way she launched her career in stunt journalism.

Sidebars that take up an entire spread are common, and there are plenty of illustrations and photographs from the time period, so there’s lots of variety in this account.

Nellie Bly, then Elizabeth Jane “Pink” Cochran, came to New York without money, planning to get hired by a newspaper. When that didn’t happen, she decided to write an article for her hometown paper, the Pittsburgh Dispatch answering the question if women reporters could get hired in New York. She interviewed the heads of the six major newspapers — and thus introduced herself to them.

Here’s the beginning of Chapter 2:

One fateful day in September, about four months into her New York adventure, Nellie — who was already nearly broke — found that her purse had gone missing, along with the last of her savings.

In the months and years to come, she would circle the globe, marry a millionaire and be widowed, take over his manufacturing empire, and become an influential businesswoman. But for now, Nellie Bly, who came to New York in search of “new worlds to conquer,” was penniless. She was also too proud to give up. “Indeed,” she wrote later, “I cannot say the thought ever presented itself to me, for I never in my life turned back from a course I had started upon.”

That was when she went to the office of the New York World, talked her way in, and proposed to the editor that she would sail to Europe and return in steerage to expose the horrible conditions.

The newspaper didn’t accept that idea, but they proposed another. Could Nellie get herself admitted to the insane asylum on Blackwell’s Island to report conditions there? If she could get herself in, the newspaper promised to get her out again.

This story — as hinted in the title — is the one the book gives in the most detail. It was frighteningly easy for Nellie to get herself admitted. Once there, she dropped the pretense of being insane — but was completely unable to talk herself out of the asylum. Conditions were horrible and the staff were abusive. Fortunately, the newspaper did get her out after ten days, and then Nellie exposed it all.

This gave her fame, and even opened up the field to more women and “stunt journalism.” Another adventure was when she went around the world in 72 days. She met Jules Verne along the way, since it was his book that had inspired the adventure.

This book is accessible to middle grade readers with its short chapters broken up by interesting sidebars, ample illustrations, and truly surprising stories. Nellie Bly had an amazing life, even when women were expected to keep quiet and do as they were told.

Find this review on Sonderbooks at: www.sonderbooks.com/Childrens_Nonfiction/10_days_a_madwoman.html