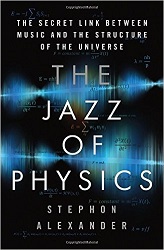 The Jazz of Physics

The Secret Link Between Music and the Structure of the Universe

I heard Stephon Alexander speak at ALA Midwinter Meeting last year. He speaks with passion about how his love of jazz gave him insights into cosmology. (Of course, I was disposed to like him, because when I got the book signed and showed him my prime factorization scarf, he liked it so much, he called over his girlfriend, an artist, from another part of the exhibits so she could see it.)

As a Black American with roots in Trinidad, Stephon Alexander knows what it’s like to be a minority in physics. This book also tells his story and how he was inspired to turn to science.

I’ll admit, I don’t understand much about the equations or the physics mentioned in this book. But the author’s excitement comes across as he explains how he discovered insights about physics in music.

During all the years of formal training as a scientist, I found myself trying to reconcile my passion for music with physics. I started to not only see how the act of doing physics research could benefit from musical analogies but how our physical world actually had a musical character. Aside from the few mentors, such as Chris Isham and Robert Brandenberger, who had encouraged me to blend the two, I felt pressure to keep these two worlds separate. Physics to some is about absolute truths encoded in rigid mathematics, and music is a language of emotion. Perhaps this tension would not have been a big deal had I known that in the early days of science, music and astronomy were inseparable. To the modern musician and scientist, this may seem preposterous, but to early people, who lacked the scientific tools we now have, music became an analogy for the ordering and structure of the cosmos.

The book talks about sound and vibration and how it relates to string theory. He talks about sonic black holes and cosmic background radiation. Especially interesting is how he arrived at a breakthrough in string theory and cosmology by thinking about jazz improvisation.

I may not understand the details presented here, but I understand passages like this:

Weaving music and physics into one avenue of thought has showed me how to use notions in music as points of access to various fields in modern physics and cosmology. Analogies have helped make the physics more accessible and stimulating.

It is wonderful to think of following the footsteps of our ancestors — the great ancient thinkers who sought to understand physics through sound, and sound through physics. Pythagoras played with hammers and strings to try to understand where the pleasures of music came from, while Kepler used his intuition that the universe was musical to make major advances in the fields of astronomy, physics, and mathematics.

He talks about how the analogies not only help explain physics, but they also help new discoveries be made.

This book is not only about the analogy between music and cosmology but also about the importance of musical and improvisational thinking in doing physics. Theoretical physicists exemplify John Coltrane’s approach to music. We use an arsenal of conceptual and mathematical tools that we practice through examples that were worked out by past masters, like Einstein and Feynman. Likewise, jazz musicians like Coltrane master their tradition throughout countless hours of practice. But for both the theoretical physicist and the jazz improviser, it is not enough to simply master the material of the past; discoveries must be made.

He ends the book by saying, “My journey to reconcile jazz with physics serves as a living example of how a small group of physicists, in the spirit of the jazz tradition, embraced me and allowed me to improvise physics with them, while challenging me to go beyond my limits.”

Find this review on Sonderbooks at: www.sonderbooks.com/Nonfiction/jazz_of_physics.html

Source: This review is based on an Advance Reader Copy I got at ALA Midwinter Meeting and had signed to me by the author.