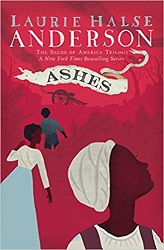 This book concludes The Seeds of America Trilogy. I never did read the first book, Chains, about Isabel, an African girl stolen into slavery during Colonial times. (I need to remedy that!) I did read Forge, the second book, about Curzon, a slave turned soldier, and what he went through at Valley Forge.

In Ashes, Isabel and Curzon have joined forces and are going through the countryside looking for Isabel’s little sister Ruth. When they find her, their welcome is nothing like Isabel hoped for. But they wind up at the army camp in Williamsburg as the American and French soldiers prepare to lay siege to the British army at Yorktown.

Isabel’s the narrator of this volume. She’s got lots to worry about — finding her sister, staying alive, staying healthy, getting money and food to travel on, and staying free. Also, how does Curzon really feel about her? He seems to care more about fighting for so-called “freedom” than about her.

This book gives a fascinating look at a time I thought I knew a lot more about than I did. Giving the vantage point of African-Americans inside the camps brings it to life so much more vividly than a textbook.

I enjoyed the Revolutionary War-era diary excerpts and letter excerpts at the start of each chapter. There are also in-depth notes at the back. I knew from reading Octavian Nothing that the British promised freedom to African-Americans who fought for them. I learned in this book that 17 of George Washington’s slaves escaped during the Revolutionary War and fled to the British. Many of those were returned to him after the war, but a few did make it to New York and managed to get safety and freedom in Nova Scotia. Twenty-three of Thomas Jefferson’s slaves fled to join the British, though six were found and recaptured after the war.

All of these tidbits (told as answers to questions that naturally arise out of the story) are accompanied by suggestions for further reading.

Find this review on Sonderbooks at: www.sonderbooks.com/Childrens_Fiction/ashes.html