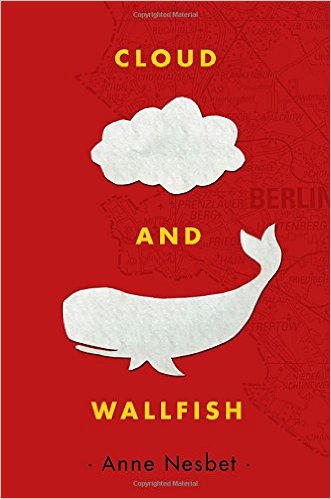 One day both Noah’s parents come to pick him up from school. He is informed that they are taking a sudden trip to Germany, leaving now. And not West Germany, the one they’d talked about going to for vacation some day, the other Germany. Noah’s Mom is going to continue her PhD research, looking at education for people with disabilities on both sides of the Wall.

That’s only the beginning for Noah. They also tell him that he’s going to be called Jonah and he has a different birthday than the one he’s always used. They even made a book for him, showing him the history of his life – with fake elementary school pictures and fake places they supposedly lived.

It’s 1989, and Noah and his parents – now the Brown family instead of the Keller family – are going to live in East Berlin for six months.

Noah has a stutter, which makes German, with all its consonants, even harder for him than English, even though he has a gift for languages and can understand. But the authorities don’t think he can speak it well enough to go to school. He meets a girl named Claudia (pronounced “Cloud-ee-a”) who lives in their apartment building with her grandma and missed school because she was sick.

Before contact is forbidden, Noah/Jonah and Claudia, who both feel like Changelings, invent a fairyland and draw pictures of that place on a map of Berlin. On the map, West Berlin is blank, so they fill it in as fairyland.

The adult reader will know this was an interesting time to be in Berlin – and sure enough, things progress as events move toward the Wall coming down. To fill in historical details, every chapter has a “Secret File” giving some background. I was a little ambivalent about those being included. But since it was information I had already, it seems only fair that kids should have that information, too.

I was pulled into this book right away, as Noah was bewildered by his parents’ news of the sudden move and name change. The characterization is brilliant as his parents take on East Germany, and Noah observes, follows the Rules, and makes a Changeling friend.

Of course, I’ve got a soft spot for this book since I lived in Germany for 10 years, though it was after the Wall fell. There was even a Sonderschule mentioned. It’s a school for special needs kids, but hey, it’s part of a special book.

Find this review on Sonderbooks at: www.sonderbooks.com/Childrens_Fiction/cloud_and_wallfish.html