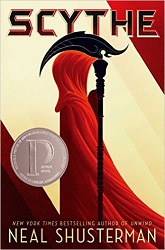 Scythe is set in the future, when mankind has conquered death completely. The Age of Mortality is over. Everybody’s got nanites inside them that heal them quickly. Revival centers can bring “deadish” people back to life – even people who fall from buildings and splatter on the pavement. (Which of course becomes a reckless teen thing to do.)

Yes, people grow old, but when their body starts wearing out, they get surgery to “turn the corner” and rejuvenate their body to a younger age.

Earth indeed is run by computers, but that’s not seen as a disaster in this book. Here’s how they describe it.

The greatest achievement of the human race was not conquering death. It was ending government.

Back in the days when the world’s digital network was called “the cloud,” people thought giving too much power to an artificial intelligence would be a very bad idea. Cautionary tales abounded in every form of media. The machines were always the enemy. But then the cloud evolved into the Thunderhead, sparking with consciousness, or at least a remarkable facsimile. In stark contrast to people’s fears, the Thunderhead did not seize power. Instead, it was people who came to realize that it was far better suited to run things than politicians.

In those days before the Thunderhead, human arrogance, self-interest, and endless in-fighting determined the rule of law. Inefficient. Imperfect. Vulnerable to all forms of corruption.

But the Thunderhead was incorruptible. Not only that, but its algorithms were built on the full sum of human knowledge. All the time and money wasted on political posturing, the lives lost in wars, the populations abused by despots – all gone the moment the Thunderhead was handed power. Of course, the politicians, dictators, and warmongers weren’t happy, but their voices, which had always seemed so loud and intimidating, were suddenly insignificant. The emperor not only had no clothes, turns out he had no testicles either.

The Thunderhead quite literally knew everything. When and where to build roads; how to eliminate waste in food distribution and thus end hunger; how to protect the environment from the ever-growing human population. It created jobs, it clothed the poor, and it established the World Code. Now, for the first time in history, law was no longer the shadow of justice, it was justice.

The Thunderhead gave us a perfect world. The utopia that our ancestors could only dream of is our reality.

There was only one thing the Thunderhead was not given authority over.

When it was decided that people needed to die in order to ease the tide of population growth, it was also decided that this must be the responsibility of humans. Bridge repair and urban planning could be handled by the Thunderhead, but taking a life was an act of conscience and consciousness. Since it could not be proven that the Thunderhead had either, the Scythedom was born.

Scythes are to lead an exemplary life in word and deed and to keep a journal.

So this is the background of this book. Such creative world building! It makes you think about the repercussions of such a world, and Neal Shusterman brings up many things I would have never dreamed of.

As the book begins, two teens, Citra and Rowan, are chosen to be apprentices of Scythe Faraday, a conscientious scythe. He chooses them partly because they don’t want to be scythes.

But scythes don’t usually take two apprentices. Scythe Faraday assures them that whoever is not chosen will resume a normal life after the year is up. But at the gathering of scythes, a new “modern” faction takes issue with that and demands that whichever one becomes a scythe, their first act will be to glean the other.

Scythe Faraday thinks of a way to get around this, but it backfires. The book takes the shape of a whodunit and a thriller.

Meanwhile, this other faction of scythes includes a leader who carries out mass gleanings and takes joy in killing. Which group will prevail, the conscientious gleaners who live simply and strive to serve humanity, or those who take joy in killing and think humanity should serve them?

This book is outstanding. The premise sounds a little grim, but it’s thoughtful and visionary and a good read as well.

The flap says this is the start of a series, but the book ties up completely. I wouldn’t have guessed it was more than a stand-alone if I hadn’t read the flap. All the same, I will be delighted to return to this intriguing future earth.

Find this review on Sonderbooks at: www.sonderbooks.com/Teens/scythe.html