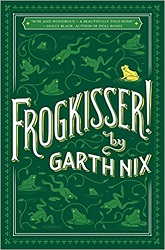 This one’s fun. Garth Nix, the author of dark and mysterious tales of necromancy in the Old Kingdom has here taken a light-hearted and more traditional route. In a tale peppered with cleverness and delightful twists on tropes, we meet Princess Anya, whose wicked stepstepfather wants to take over her sister Morven’s kingdom.

He’s her stepstepfather because he married her stepmother. The stepmother “was expected to be quite evil but mainly turned out to be a very enthusiastic botanist.” But Anya’s father died a year after marrying the stepmother, and her stepmother married Duke Rikard.

So the girls had two stepparents. Their stepmother the botanist wasn’t a huge problem, but as it turned out, their stepstepfather was evil and wanted to be the king. Though Morven should by rights be crowned when she turned sixteen, in three months’ time, it was fairly certain Duke Rikard would somehow prevent this from happening.

Anya’s adventures begin when Duke Rikard transforms the current prince Morven’s in love with into a frog. But then he jumped into the moat with thousands of other frogs. Morven gets Anya to make a Sister Promise that she’ll find him. Anya makes a magical dowsing rod with the help of Gotfried, their castle librarian/sorcerer, to figure out which frog is Denholm, using hair from Morven’s locket.

But when she brings the frog to Morven, her sister refuses to kiss a frog. Fortunately, Gotfried has one dose left of Transmogrification Reversal Lip Balm. This works best when a princess uses it, so now Anya gets to kiss the frog.

But when Anya does so, the frog turns out to have been a different former love of Morven’s, not Denholm. And then her stepstepfather, who notices someone has tampered with his spell, decides to send Anya to a distant land to school, and he’s got a new prince for Morwen who Anya realizes is a transformed magpie – with no actual family or kingdom to help Morwen take her rightful place as queen.

Anya does manage to find Denholm, in the hands of the local frogcatcher. But then consultation with the Royal Dogs convinces her the time has come for her to go on a quest.

“You can’t hide away,” the elder dog informed Anya. “You can’t even go back to the castle now. It is time that you sought help against the Duke. He grows in strength and power, and he clearly feels he can move against you and Morven now. This is your Quest: to find those who can help you defeat the Duke.”

When Gotfried gives her a copy of the spell for the making of “Fairly Reliable Transmogrification Reversal Lip Balm,” Anya gives in and adds to her quest a search for the ingredients to the spell, which include witch’s tears, a retired druid’s blood, and feathers fresh-pulled from a cockatrice’s tail.

Along the way, Anya collects allies – but many of those have also suffered transmogrification. Anya will get their help if she promises to reverse their transformation once she makes the lip balm. And so she assembles a motley crew. Once the heralds give her the name Frogkisser, her reputation spreads. When she finally assembles the ingredients, Denholm manages to break free and get into a pond with many other transformed frogs – so the Frogkisser name is apt.

This book is full of silly fun, with a nice traditional quest and amusing obstacles.

I enjoyed it immensely – so I’m not quite sure why it took me a very long time to finish. Probably the episodic nature of the story made the book easy to put down. This is light-hearted magical fun that makes me smile as I write the review.

Find this review on Sonderbooks at: www.sonderbooks.com/Childrens_Fiction/frogkisser.html