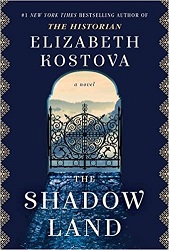 When Alexandra Boyd gets off the plane in Sofia, she’s jet lagged, exhausted, and not even thinking straight. She’s in Bulgaria to begin teaching English, but came a month early to do some sight-seeing. First, the taxi driver brings her to a nice hotel, instead of the hostel where she has a room booked – and drives off before she can fix it.

While she’s trying to figure out what to do, she sees an elderly couple and a younger man come out of the hotel. As the younger man is helping the older man in a wheelchair get into a taxi, the older lady stumbles. Alexandra catches her arm and helps her. And then she passes their bags to them and helps them settle in the cab.

The younger man thanks her, and chats with her about her travel plans. She asks if she can take their picture – the first people she’s spoken to in Bulgaria.

Then Alexandra gets into a taxi and heads for her hostel. But as they are driving away, she suddenly notices that she has the tall man’s satchel. When she opens it up, it contains an urn with ashes and a name on the urn, Stoyan Lazarov. She asks the taxi driver to stop and bursts into tears.

When Alexandra opened the urn, she began to cry not because she was afraid of human remains but because it was just too much, the last straw. She was in a strange country, she was exhausted, her plans had already gone awry, and in the dramatic way of the young she felt herself in the grip of something larger — destiny, or some plot that could as easily be evil as good.

Alexandra has the driver, who says she can call him Bobby, take her back to the hotel, but there’s no sign of the people who lost the urn. She goes to the police, which Bobby doesn’t think is a great idea. But the police give her an address to try. First, though, she and Bobby drive to the monastery where the tall man said they’d be traveling.

In the monastery, Alexandra and Bobby get locked into a room, but it turns out Bobby has lockpicking skills.

By now Bobby is interested in Alexandra’s quest, so they continue on the trail of the Lazarov family. Each place they go, they find the family is not there, but get another lead of a place where they might be found. Along the way, they find out more about Stoyan Lazarov as well. But at the same time, as they travel, Bobby’s car is vandalized and they get threatening notes. Someone besides the Lazarov family seems to want the urn.

This book has a chase saga and a mystery, as well as being a story of a young American woman traveling in Europe on her own for the first time. Just when I thought it was especially lovely, pleasant reading, the book starts delving into the history of Bulgaria – particularly Stoyan Lazarov’s time in a prison camp – particularly brutal and awful.

But the overall feeling of the book is hopeful and surviving through art and through love. The story is compelling, as Stoyan Lazarov’s past has repercussions in the present.

This is a very personal story, despite having large themes. Alexandra has some of her own issues to deal with, but she cares about the people she meets along the way, and the reader can’t help but care, too. The author weaves in flashbacks well, never interrupting Alexandra’s story long enough to make us impatient.

I still say it’s a lovely book, even though it has some very hard chapters. The author brings Bulgaria to life so vividly and so lovingly, I wasn’t surprised to read at the back that she’s married to a Bulgarian. The plot is gripping, yet she manages to weave in lots of background material without letting up on the tension. On top of all that, these characters – from Alexandra and Bobby all the way to the man in the urn – are people you come to love.

Find this review on Sonderbooks at: www.sonderbooks.com/Fiction/shadow_land.html