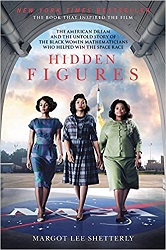 After I saw the movie Hidden Figures, I immediately ordered myself a copy of this book. I knew it was one I’d want to own. I was not wrong. (And I have a small collection of books related to Math.)

Now, the movie is – a movie. It presents a summary of the high points of the lives of three female black mathematicians who made a difference at NASA, especially in getting a man to the moon. It’s told in an entertaining way and makes an inspiring story.

The book has a whole lot more detail. The three women featured in the movie had long careers at NASA that lasted decades. Many black female mathematicians began working for the National Advisory Committee for Aeronautics as far back as World War II.

The book has many more details and a far wider scope. You get hints of all the author will cover in her Prologue. Here are some bits from that.

Even if the tale had begun and ended with the first five black women who went to work at Langley’s segregated west side in May 1943 – the women later known as the “West Computers” – I still would have committed myself to recording the facts and circumstances of their lives. Just as islands – isolated places with unique, rich biodiversity – have relevance for the ecosystems everywhere, so does studying seemingly isolated or overlooked people and events from the past turn up unexpected connections and insights to modern life. The idea that black women had been recruited to work as mathematicians at the NASA installation in the South during the days of segregation defies our expectations and challenges much of what we think we know about American history. It’s a great story, and that alone makes it worth telling….

I discovered one 1945 personnel document describing a beehive of mathematical activity in an office in a new building on Langley’s west side, staffed by twenty-five black women coaxing numbers out of calculators on a twenty-four-hour schedule, overseen by three black shift supervisors who reported to two white head computers. Even as I write the final words of this book, I’m still doing the numbers. I can put names to almost fifty black women who worked as computers, mathematicians, engineers, or scientists at the Langley Memorial Aeronautical Laboratory from 1943 through 1980, and my intuition is that twenty more names can be shaken loose from the archives with more research….

To a first-time author with no background as a historian, the stakes involved in writing about a topic that was virtually absent from the history books felt high. I’m sensitive to the cognitive dissonance conjured by the phrase “black female mathematicians at NASA.” From the beginning, I knew that I would have to apply the same kind of analytical reasoning to my research that these women applied to theirs. Because as exciting as it was to discover name after name, finding out who they were was just the first step. The real challenge was to document their work. Even more than the surprisingly large numbers of black and white women who had been hiding in a profession seen as universally white and male, the body of work they left behind was a revelation….

But before a computer became an inanimate object, and before Mission Control landed in Houston; before Sputnik changed the course of history, and before the NACA became NASA; before the Supreme Court case Brown v. Board of Education of Topeka established that separate was in fact not equal, and before the poetry of Martin Luther King Jr.’s “I Have a Dream” speech rang out over the steps of the Lincoln Memorial, Langley’s West Computers were helping America dominate aeronautics, space research, and computer technology, carving out a place for themselves as female mathematicians who were also black, black mathematicians who were also female. For a group of bright and ambitious African American women, diligently prepared for a mathematical career and eager for a crack at the big leagues, Hampton, Virginia, must have felt like the center of the universe.

I must admit, what excited me about this story is that it’s a story about many female mathematicians!

Why is that exciting to me? Well, back in the 1980s, I was a 21-year-old PhD student in Math at UCLA. Out of 120 new graduate students that year, only 5 of us were female, and only one other female was in the PhD program. I did end up dropping out of the PhD program and settling for my Master’s. But while I was there, I felt so much like an exception. The Math department had a long line of portraits on the wall of great mathematicians – and I only remember one woman, Emmy Noether. I always took great pleasure in getting better grades than my male fellow students (as an undergrad, anyway) – but it would have been nice to know about a time when, during World War II especially, the government specifically recruited women to do math.

Now, once they hired them, it was an uphill battle to get the pay or recognition that men with the same qualifications should get. That’s part of the story in Hidden Figures as these brilliant women worked to get the promotions and pay they deserved. Mary Jackson in the book and in the movie overcame obstacles to get the title of “engineer.”

But the book also talks about the history of civil rights as it was played out at Langley. The beautiful thing was that these brilliant women could do the math – and the quality of their work did prevail over the years.

The book begins in 1943, when Dorothy Vaughan began working at the Langley Memorial Aeronautical Laboratory. It continues through landing a man on the moon, and how Katherine Johnson’s equations helped get them there. An epilogue refers to many more years and many more women serving our country with mathematical skills.

This book isn’t a quick summary – watch the movie for that. (And I highly recommend it!) It does give a detailed and epic story of brilliant, unappreciated women who made a lasting contribution to American history.

Katherine Johnson’s story can be a doorway to the stories of all the other women, black and white, whose contributions have been overlooked. By recognizing the full complement of extraordinary ordinary women who have contributed to the success of NASA, we can change our understanding of their abilities from the exception to the rule. Their goal wasn’t to stand out because of their differences, it was to fit in because of their talent. Like the men they worked for, and the men they sent hurtling off into the atmosphere, they were just doing their jobs. I think Katherine would appreciate that.

Find this review on Sonderbooks at: www.sonderbooks.com/Nonfiction/hidden_figures.html