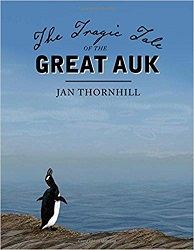 The Tragic Tale of the Great Auk

This picture book, by focusing on one extinct species, is an accessible and understandable introduction to the need for conservation.

Behold the Great Auk! The Gejrfugl! The northern penguin!

Less than four centuries ago, hundreds of thousands of these magnificent birds lived in the frigid seas between Europe and North America.

Now there are none.

It’s a complicated story. Although humans – as you may suspect – did indeed have a heavy hand in the Great Auk’s extinction, there were other factors that contributed to its demise, not the least of which was the bird’s own anatomy and behavior.

The story is told beginning from when the Great Auk thrived. They couldn’t fly, and could barely walk, but could swim swiftly. They live mostly on and in the water, but they had to lay their eggs on land. So they protected their young by nesting in inaccessible places.

I thought this tidbit was fascinating:

During the last Ice Age, when much of northern Europe and most of Canada lay frozen beneath a half mile of ice, the oceans were colder, so the Great Auk was found further south. Five thousand years before the glaciers retreated, a group of Stone Age humans entered a cave not far from the Mediterranean. They mixed charcoal and red-ochre pigment into paint, then used crude brushes and their fingertips to make images of the animals they hunted.

And they painted Great Auks.

Paleontologists have found other signs that early humans enjoyed eating fire-roasted Great Auk just as much as we enjoy eating barbecued chicken today. Numerous tool-marked remains of the bird’s big bones have been unearthed from ancient fire pits and trash heaps on both sides of the Atlantic, up and down the coasts. Some charred bones are almost ninety thousand years old.

Though the final last straw, sadly, happened in 1830 when a volcanic eruption caused one of their last nesting grounds to disappear under the sea.

The book explains the whole story with colorful pictures, including the danger that came from collectors as well as those who wanted to eat the birds. In many of the pictures, the Great Auk is only present in a ghostly outline form, where they were once numerous, but now are nowhere to be found.

The book finishes with the birth of the conservation movement. Here’s hoping the tragic tale of the Great Auk will not be lived out by many other species.

Find this review on Sonderbooks at: www.sonderbooks.com/Childrens_Nonfiction/tragic_tale_of_the_great_auk.html