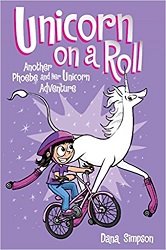 Unicorn on a Roll

Another Phoebe and Her Unicorn Adventure

This is the second collection about a girl named Phoebe and her best friend, the unicorn Marigold Heavenly Nostrils. And I am officially a Phoebe and her Unicorn fan.

In this volume, Phoebe releases Marigold from the wish that made Marigold Phoebe’s best friend – and discovers Marigold wants to be her friend anyway.

Phoebe faces normal kid things – such as wanting a part in the school play and competing in the school spelling bee against the boy she has a crush on. But she also faces things unique to someone whose best friend is a unicorn who is convinced she’s the best thing in the universe.

One nice sequence is when Phoebe gets to go to the land of the unicorns for a party – when the unicorns decide to hold an intervention, trying to convince Marigold to stop being friends with an icky human. They are unsuccessful.

Oh, and we learn that Marigold Heavenly Nostrils is skilled at roller skating – though Phoebe can’t ride her when she does. (Hence the title.)

This comic strip is all that a comic strip should be – inventive, funny, true to life, and with insights about life that sneak up on you.

Find this review on Sonderbooks at: www.sonderbooks.com/Childrens_Fiction/unicorn_on_a_roll.html

Source: This review is based on my own copy, sent by the publisher.