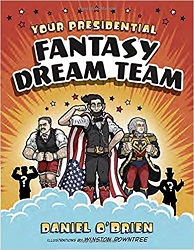 I had a whole lot of fun booktalking this book in the local elementary schools this year. I never realized a book about the presidents could be so much fun.

Here’s how the author explains the premise:

I can’t predict the future. So I’m not saying that several years from now, robots will rise up and attempt to overthrow humanity and it’ll be up to you to travel through time and assemble a Presidential Attack Squad to defend America. But I am saying that we’d all feel really stupid if at least one of us wasn’t prepared for such an event. If you’re ever tasked with organizing the Dream Team of Presidents, this chapter will probably be more helpful than any other chapter in any book, ever.

Whether you’re forming an action team to defend the planet or just putting together a group of presidents to pull off some kind of grand scheme, every good team needs Brains, Brawn, a Loose Cannon, a Moral Compass, and a Roosevelt. I’ve included my best recommendations for all these positions, but you should feel free to pick your own.

He proceeds to tell about the presidents, rating them in terms of brains, brawn, loose cannon, moral compass and whether they’re a Roosevelt(!). But the fun in reading this book is his irreverent tone and over-the-top descriptions. I’m afraid this book was far more entertaining than Ken Burns’ worthy and lovely picture book of presidents, though that one would probably make a better resource for reports.

He includes scandalous and surprising facts such as Ulysses Grant was a drunk, and Andrew Jackson had so many bullets in his body, contemporaries said he rattled like a bag of marbles when he walked.

During this time, Wilson grew suspicious of even his closest friends (something historians later attributed to undiagnosed brain damage). He went days without sleeping and his brain slowly started deteriorating, which, like everything at this point, only made Wilson angrier and more stubborn. Determined to win public support for the League of Nations, Wilson decided to go against the orders of his wife, doctors, and basic common sense, and toured the country to give speeches that would rally people to his side. He rode all over America, coughing and sneezing and being fed predigested foods (the only foods he could eat) by day, and giving rousing speeches by night (sometimes five in one day). He delivered his speeches with closed eyes, shaking hands, and a weakened voice. With his wheezing, sleeplessness, strained mumbling, rapidly failing body, and singular, obsessed focus, it’s not completely uncalled for to label Woodrow Wilson our first zombie president.

The book only includes past presidents who have already died, so we don’t have the gift of finding out how this irreverent historian would approach our first president. (I’m thinking “Loose Cannon” is his strongest field.)

In conclusion, Daniel tells kids that the reason he wrote this book is “to teach you that history is much cooler than they tell you it is in school.”

It’s safe to say this is one of the most entertaining history books I’ve ever read.

Find this review on Sonderbooks at: www.sonderbooks.com/Childrens_Nonfiction/presidential_fantasy_dream_team.html