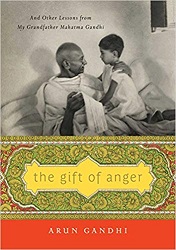 The Gift of Anger

And Other Lessons from My Grandfather Mahatma Gandhi

This book is filled with stories of things that Arun Gandhi learned as a child when he lived for two years on the ashram with his grandfather, Mahatma Gandhi. I read a chapter a day, which gave me some nice, inspirational food for thought. I learned much I didn’t know about Mahatma Gandhi, but what I love most about this book is how it radiates peace and nonviolence. Reading this book makes it much easier to see how counterproductive it is to hold onto anger.

The chapters themselves are listed as “lessons.” So “Lesson One” is “Use Anger for Good.” Lesson Four is “Know Your Own Worth.” Lesson Five is “Lies Are Clutter.” Lesson Six is “Waste Is Violence.” And Lesson Eight is “Humility Is Strength.” The book includes eleven lessons, all illustrated by stories and insiights. Lesson Nine gives us “The Five Pillars of Nonviolence,” and throughout the book, a picture develops of the power of a nonviolent life.

I wasn’t surprised by the title story and the lesson “Use Anger for Good,” because I’d read about that incident in Arun Gandhi’s picture book, Grandfather Gandhi. When Arun came to the ashram as a boy, he had a lot of anger. His grandfather talked with him, including this insight:

Bapuji looked over at me from behind his spinning wheel. “I am glad to see you can be moved to anger. Anger is good. I get angry all the time,” he confessed as his fingers turned the wheel.

I could not believe what I was hearing. “I have never seen you angry,” I replied.

“Because I have learned to use my anger for good,” he explained. “Anger to people is like gas to the automobile – it fuels you to move forward and get to a better place. Without it, we would not be motivated to rise to a challenge. It is an energy that compels us to define what is just and unjust.”

Grandfather explained that when he was a boy in South Africa, he too had suffered from violent prejudice, and it made him angry. But eventually he learned that it didn’t help to seek vengeance, and he began to fight against prejudice and discrimination with compassion, responding to anger and hate with goodness. He believed in the power of truth and love. Seeking revenge made no sense to him. An eye for an eye only makes the whole world blind.

And that’s only the first lesson! The lessons progress, and are usually accompanied by stories from Arun’s life with his grandfather, though there are usually other illustrations as well. The lessons include Mahatma Gandhi’s time of political activism, using nonviolent protest to free India from British rule, and they continue all the way up to his death, and Arun’s struggles with wanting revenge. Ultimately, honoring his grandfather’s legacy won out.

“Forgiveness is more manly than punishment,” Bapuji had said.

When we are tested, we don’t prove our strength with violence or anger but by directing our actions for good. India had given Bapuji the great gift of a brief peace after his death. I had to give him the similar gift of forgiveness in the face of great evil. Bapuji had once explained that it is easy to love those who love you, but the real power of nonviolence comes when you can love those who hate you.

There’s lots of wisdom in this little book.

Find this review on Sonderbooks at: www.sonderbooks.com/Nonfiction/gift_of_anger.html