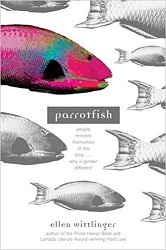 I have a transgender adult daughter. So it’s high time I read this by now classic teen novel about a transgender teen boy. Though I wish I’d read it before I had a specific reason to do so – this is simply good writing.

Grady has decided to start his junior year of high school as the person he truly is – a boy. But when he tells his family and his former best friend to call him Grady instead of Angela, the reactions are mixed. When he tries to explain to his teachers and get them to use his new name, the responses are also mixed.

But this is ultimately a hopeful and uplifting novel. Grady makes a new friend, a nerdy guy named Sebastian who’s in his TV Production class. Sebastian asks Angela to the school dance, so Grady has to explain. Sebastian tells him that’s just like the stoplight parrotfish, which he’s doing a report on for Environmental Science. In fact, Sebastian tells him that there are many fish and other animals which change gender.

I thought you’d like some real evidence here that you are not alone in the animal world. There are other living creatures that do this all the time. ‘Nature creates many variations.’ I’m using that line in my paper.

The story of the book plays out as Grady’s Dad is preparing the Christmas Extravaganza their family does every year – even though everyone else in the family is tired of it. Grady’s younger, spoiled brother wants a dog, and his younger sister is embarrassed that everyone’s talking about Grady now. Meanwhile, Grady’s former best friend Eve has gotten in with the in-crowd of the school – led by a girl who’s a real bully, and sees Grady as a target.

And meanwhile, Grady’s making new friends, including a girl he has a crush on – but who’s the girlfriend of one of his new friends from TV Production class. Can a freak like him even dare to fall for someone? But maybe these new friends don’t see him as a freak. In fact, he finds himself giving advice to both the girl and the guy in that relationship – and they both appreciate that Grady is good at understanding both sides.

This is an excellent story about navigating relationships with friends and family in high school. And the main character happens to be transgender. I thoroughly enjoyed this book.

Find this review on Sonderbooks at: www.sonderbooks.com/Teens/parrotfish.html