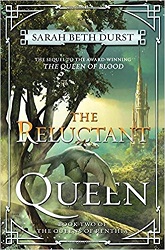 Book Two of The Queens of Renthia

The Reluctant Queen begins exactly as a Book Two should do, with a quick summing up that jumps into the action (Don’t read this if you haven’t read Book One!):

Everything has a spirit; the willow tree with leaves that kiss the pond, the stream that feeds the river, the wind that exhales fresh snow . . .

And those spirits want to kill you.

It’s the first lesson that every Renthian learns.

At age five, Daleina saw her uncle torn apart by a tree spirit for plucking an apple from his own orchard. At age ten, she witnessed the destruction of her home village by rogue spirits. At age fifteen, she entered the renowned Northeast Academy, and at age nineteen, she was chosen by a champion to train as his candidate. She became heir that same year and was crowned shortly after, Queen Daleina of the Forests of Aratay, the sole survivor of the Coronation Massacre. She’d heard at least a half-dozen songs about her history, each more earsplitting than the last. She particularly hated the shrill ballads about her coronation, a day she wished she could forget. Instead she had it hammered into her skull by a soprano with overly enthusiastic lungs.

Six months after her coronation, now that the funerals – and so many of her friends’ graves – weren’t so fresh, all of Aratay wanted to celebrate their new queen, and she was swept along with them. For her part, she planned to demonstrate her sovereignty by healing one of the barren patches created during the massacre and replacing it with a new village tree.

It is, she thought, one of the worst ideas I’ve had in weeks.

Indeed, when she collapses during the effort – and people who came to witness it are killed, Daleina is even more convinced it was a bad idea. Her friend the Healer does test, and tells Daleina that she is dying. She has an incurable sickness that will lead to more and more blackouts and eventually her death. These will get worse the more she uses her power. But what is a Queen of Aratay without using her power?

Even worse, in the last book, when Daleina became Queen, all the other candidates died. There is no one remotely ready to step into her place. But if Daleina dies before an heir is ready – the spirits will destroy Aratay and everyone in it.

So this second book is, once again, about finding someone to be queen. Daleina asks her champions to look for suitable candidates to train. But only very young girls are left in the academies.

That is, except for Naelin. She’s a mother of two young children who has always tried to hide her power. Nothing good can come of getting attention from the spirits! But will she step up for the good of Aratay? How about to protect her own children?

There are two plot threads in this book. One is the training of Naelin. The other is back at the palace, trying to find a cure. And then there are signs of foul play. And candidates start dying. The plot threads come together in an exciting and satisfying showdown.

The first book in this series was nicely self-contained, as I like first books to be. This one? Well, you do need to read the first book first to fully understand this world. Part of me felt like, But we just found a queen! – But I think it helped me feel more fully the tragedy of Daleina coming down with this illness so quickly after her coronation.

And the book ends with new impending dangers. I very much want to read on! My review of the next book will probably give away what happens in this one. Trust me! This is an imaginative series with some awesome world-building, intriguing characters, and plenty of suspense and danger. I am definitely going to want to read on as long as it continues!

Find this review on Sonderbooks at: www.sonderbooks.com/Fiction/reluctant_queen.html

Source: This review is based on my own copy, which was sent to me by the author.