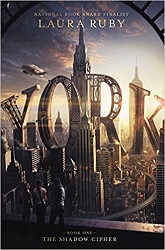 The Shadow Cipher is set in modern-day New York – but in an alternate universe. This world has very different technology than our own, including genetically engineered pets and therapy animals. But the biggest differences came from innovations built into New York City by the brilliant Morningstarr twins in the 1800s.

When an evil real estate developer – named Darnell Slant – buys their building and they have to get out in 30 days, Tess and Theo are horrified. At the same time, they come upon an original letter written by Tess Morningstarr. It seems to be a new clue – leading to a whole new chain of clues. Working with Jaime, another kid who’s getting evicted from the building, the three of them plan to find the treasure to save the day.

This book has a good puzzle story and adventure yarn. It’s not like the reader can solve the clues themselves, but it’s fun to read about the kids going from one clue to another.

Now, could a cipher really stay intact for more than a hundred years? They try to get around this amazing coincidence by commenting on them and saying that it seems like the Cipher is solving them. That wasn’t quite good enough for me – but I’m a more-skeptical-than-average reader.

There was one incident that pulled me out of the book. At one point, Tess was so upset from being evicted, she had trouble sleeping.

She’d tried her favorite guided meditation video for an hour. She’d organized her underwear drawer by color. She’d tried counting backward from one million. When the sun rose that morning, she was on number 937,582.

I’m sorry – I don’t buy it! 937,582 is more than 60,000 less than a million. If Tess were able to count one number per second (which would be incredibly fast for such big numbers), it would take her more than 16 hours to get to such a relatively low number!

Now – I posted my complaint on Facebook in general terms. One of my friends speculated that Tess may be an android. And you know what? Even after finishing the book, that is a possible explanation. In fact, as the book goes on, Tess gets an uncomfortable feeling that many of the machines made by the Morningstarrs are alive! Perhaps Tess herself is a machine made by the Morningstarrs, and this is our first clue.

All the same, I have my doubts. I think it was probably a mistake rather than a cleverly planted clue to Tess’s real identity.

But the book is fun. And full of surprises. The story doesn’t finish, in fact the book ends on the threshold of further adventures. So this is part of a series you’ll certainly want to read in order.

The science in the book seems iffy to me – but any time machines seem to come alive, I’ll have some trouble with it. Also the coincidences. In general, the book is more like fantasy. But I didn’t mind it too much while I was reading it. You’ve got an imaginative alternate world, an intriguing puzzle, and a fun story of three children on an adventure trying to solve the puzzle and save their home.

Find this review on Sonderbooks at: www.sonderbooks.com/Childrens_Fiction/york.html