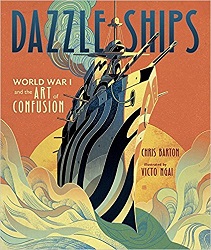 World War I and the Art of Confusion

Raise your hand if you knew that thousands of ships got painted with bold, stripy, dazzling designs during World War I.

What’s that? No one?

I certainly didn’t know it. But after Germans began using submarines to attack ships, lieutenant-commander Norman Wilkinson suggested that the Royal Navy try camouflaging their ships.

I suddenly got the idea that since it was impossible to paint a ship so that she could not be seen by a submarine, the extreme opposite was the answer – to paint her, not for low visibility, but in such a way as to break up her form and thus confuse a submarine officer as to the course on which she was heading.

They put the idea into action. There was even a Women’s Reserve Camouflage Corps in America to do the painting.

By the time the fighting stopped, 1,256 American ships had been painted in dazzle designs along with close to 3,000 British ships.

And that’s most of the story. The book includes background about World War I and why they tried this, as well as speculation as to whether it worked or not. There are lots of pictures of dazzle ships, no two alike. The illustrations in this book are wonderful, done in the style of the time. They make the book all the more fascinating, and dazzling.

I like the way the book ends (before the five pages of notes):

Times change. Technology changes. Torpedoes get faster, submarine targeting systems get computerized, challenges of all kinds get replaced by new ones. But a willingness to tackle problems by trying the unlikely, the improbable, the seemingly bonkers will always be needed.

After all, as those of us inspired by Norman Wilkinson’s paint job know, sometimes desperate times call for DAZZLING measures.

Find this review on Sonderbooks at: www.sonderbooks.com/Childrens_Nonfiction/dazzle_ships.html