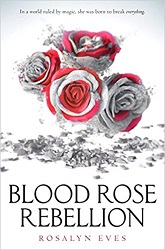 I’m getting used to alternate histories with magic, but this was an alternate history of something I didn’t know much about in the real world – the Hungarian revolution in 1848.

Anna Arden doesn’t mean to break other people’s spells. But sometimes, especially when her emotions get stirred up, this happens spectacularly, and people get hurt. After she ruins her sister’s debut, she’s sent off with her grandmother to stay in Hungary for awhile at her grandmother’s childhood home.

But various people find out about Anna’s unusual abilities. Would she be able to break the Binding spell – the one that confines magic to the nobility, the Luminate class? And what are the motives of the people who want to use her in this way? But at the same time, what would be the cost? Would this break the power of the Circle, so that common people can have access to magic? But what will the Circle do to stop her?

Anna’s confused as to what she should do. Meanwhile, there’s a handsome Romani young man whom Anna would like to teach her Romani magic. Maybe if she can’t do Luminate magic, maybe she could do Romani magic, which is so different.

Romance and adventure, magic and danger – all put into the context of the actual history of the Hungarian rebellion from the Hapsburgs.

Find this review on Sonderbooks at: www.sonderbooks.com/Teens/blood_rose_rebellion.html