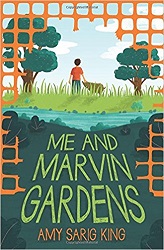 Me and Marvin Gardens

Obe Devlin has loved animals for a long time and looks for animal tracks down by the creek. The creek has been part of his family’s land for generations – but unfortunately they lost most of their land in his great-grandfather’s day. And recently, the farmers who replaced their family have sold the land to developers. But the Devlins still have the creek.

And then Obe discovers an animal no one’s ever seen before. It’s not a dog; it’s not a pig. It has a strange half-hoof. And it eats plastic! Maybe it’s a pollution solution! It’s slimy to touch, but it’s friendly and comes when Obe calls. He finds himself making friends with the animal – and Obe needed a friend, because his best friend has started playing with kids who have moved into the new houses and make fun of Obe.

Obe names the creature Marvin Gardens (his dad loves Monopoly). But then he discovers that Marvin’s poop is horribly foul smelling and apparently toxic. It’s brightly colored like the plastic Marvin eats, and turns grass brown and creates holes in the land. When some kids step in Marvin’s scat and it eats through their shoes and anything they walk on – there’s going to be trouble.

What should Obe do? Who can he trust? Will anyone believe him that he’s found a new species? And how can he protect Marvin if anyone else finds out about him?

This book is wonderfully written with lots of different pieces coming together. Obe’s family are characterized beautifully and realistically. We find out slowly what happened between Obe and his former best friend, and we see him develop a new friendship. We completely understand his worries about getting out to see Marvin, and why he’d be reluctant to tell anyone. Especially we see how Obe’s learning to be a scientist and an environmentalist, and how he’s just the right person to discover this new species and learn about it and protect it.

Here’s the part where Obe first sees the animal’s tracks:

I kept shining my flashlight around the bank. And then I saw the track. I was sitting right next to it.

If I was Bernadette, I would have just taken out my phone and snapped a picture of it, but I was eleven so I didn’t have a phone or even a decent camera. I tried to take a mental picture.

It had toes and a central pad, but also had a hoofed edge. It was part dog and part pig or something. It made no sense, this track. I tried to picture the foot that could have made it. I looked for others, and when there were no others, I figured someone must have been playing a joke on me. Tommy knew about my pocket guide to animal tracks. He was with me when I found my first beaver track downstream. That was the first day he called me Creek Boy.

The noise made the hair on my arms and legs stand straight up. Maybe the hair everywhere. My heart beat fast and I thought it was Tommy and his friends because I didn’t believe stories about monsters or ghosts. But it wasn’t Tommy.

The animal was five feet from me, half in the creek, half on the bank.

It was definitely not a dog.

Big thanks to my co-worker Amanda for booktalking this book – I finally got around to reading it, and was very glad I did!

Find this review on Sonderbooks at: www.sonderbooks.com/Childrens_Fiction/me_and_marvin_gardens.html

Source: This review is based on an Advance Reader Copy I got at an ALA conference.