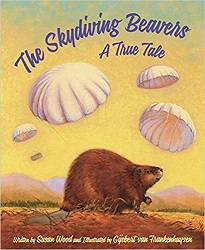 How’s that for a catchy title? I had to find out about the skydiving beavers!

This nonfiction picture book tells about an effort in 1948 to move beavers from a lake where people had settled to Idaho back country wilderness.

The place where they wanted to relocate the beavers was so wild, it didn’t have any roads or railroads. So how to get the beavers there? Horses or mules wouldn’t be too happy to transport angry beavers, and that would take a long time.

A man named Elmo Heter, who worked for the Idaho Department of Fish and Game, came up with a plan. They had plenty of parachutes leftover from World War II, and they decided to use them to transport the beavers.

Elmo designed a box that would automatically open when it landed. But he had to test it to make sure. He caught a beaver and named him Geronimo. He used Geronimo to test his design over and over to make sure it worked. I thought this was funny:

After a while, it seemed Geronimo was growing to like all the skydiving. Each time he touched down and the box sprang open, he’d scurry out . . . then crawl right back in for another go.

Eventually, they used the parachutes and self-opening boxes to transport seventy-six live beavers into the Chamberlain Basin region.

A note at the back gives more details, but also explains that today we try to find ways to live with beavers, because beaver communities are great for the environment. The note tells about a successful such effort in Martinez, California. There’s also a list of surprising facts about beavers.

So even though it will probably never happen again, it was fun to read the true story of the skydiving beavers!

Find this review on Sonderbooks at: www.sonderbooks.com/Childrens_Nonfiction/skydiving_beavers.html