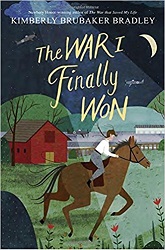 The War I Finally Won

The War I Finally Won is the sequel to the wonderful award-winning book The War That Saved My Life, by Kimberly Brubaker Bradley. It was my #1 Sonderbooks Stand-out in Children’s Fiction for books I read in 2016. Yes, you should read the first book first.

The book begins with Ada having surgery to fix her clubfoot so she can walk without crutches. But the war is going on, and a lot of people she knows are dying, including her Mam – which means that Susan can become Ada and Jamie’s legal guardian.

Susan’s house was destroyed in the first book – but Lady Thorton gives them a home in a “cottage” on her estate – a bigger place than Susan’s house had been. However, things get smaller when Lady Thorton moves in with them after her stately home is requisitioned by the government. And then Susan is asked to tutor a 16-year-old German Jewish girl named Ruth.

Lady Thorton doesn’t want to have anything to do with a German girl, because her son is in harm’s way fighting the Germans, but she has to give in. Ada only gradually comes to understand that Ruth hates Hitler just as much as they do.

Ada still has the same voice as in the first book. There are still a lot of words she doesn’t understand because she has no experience with them. And she still is prone to emotional outbursts, still has trouble feeling safe.

This book explores many aspects of what it means to be a family. It was marvelous watching Ada’s fragile heart open wider, even while dealing with the hardships and tragedies of wartime.

Find this review on Sonderbooks at: www.sonderbooks.com/Childrens_Fiction/war_i_finally_won.html