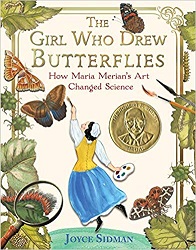 The Girl Who Drew Butterflies

This book has a prologue, with the heading, “The Girl in the Garden.” Quoting from it will tell you the background of Maria Merian’s life.

A girl kneels in her garden. It is 1660, and she has just turned thirteen: too old for a proper German girl to be crouching in the dirt, according to her mother. She is searching for something she discovered days ago in the chilly spring air. As she combs the emerald bushes, she looks for other telltale signs – eggs no bigger than pinpricks, or leaf edges scalloped by the jaws of an inching worm. . . .

But for years she has gathered flowers for her stepfather’s studio, carried them in, and arranged them for his still-life paintings. She has studied the creatures that ride on their petals: the soft green bodies of caterpillars, the shiny armor of beetles, the delicate wings of moths. She has looked at them closely, sketched and painted them. In learning the skills of an artist, she has learned to look and watch and wonder.

Imagine this girl, forbidden from training as either a scholar or a master artist because she is female. Aware that in nearby villages women have been hanged as witches for something as simple as showing too much interest in “evil vermin.”

Yet she is drawn to these small, mysterious lives. She does not believe the local lore: that “summer birds,” or butterflies, creep out from under the earth. She thinks there is a connection between butterflies, moths, caterpillars, and the rumpled brown cocoon before her, and she is determined to find it.

This is her story.

The biography that follows tells of a woman far ahead of her times. She was both an artist and a scientist. She was an artist because she assisted her father and her husband and learned from them – she wouldn’t have been able to study on her own merits. She was a scientist by virtue of her own patient observations. She learned which caterpillars transformed into which moths or butterflies and which cocoon or chrysalis went with each.

She made her observations known by painting them. She would paint creatures on the same plant where she found them, and she would paint a butterfly with its egg, caterpillar, pupa, and chrysalis in the same picture.

This book is lavishly illustrated with Maria Merian’s own paintings as well as photographs of caterpillars, moths, and butterflies. Quotations from Maria’s writings are included, set off in a box and printed in script. Every spread has something colorful to catch the eye.

The structure of Maria’s biography follows the life cycle of a butterfly, with chapter titles: “Egg,” “Hatching,” “First Instar,” “Second Instar,” “Third Instar,” “Fourth Instar,” “Molting,” “Pupa,” “Eclosing,” “Expanding,” “Flight,” and “Egg” again. Joyce Sidman has written a poem for each chapter, placed next to a photo of a caterpillar or butterfly at that stage.

Maria’s unique combination of observation plus art left a mark that affected scientists after her. After her death, Carl Linnaeus used her book to classify and name more than one hundred insects – names we still use today.

The exquisite paintings and detailed photographs make this a beautiful book worth browsing – even if it weren’t packed with facts about an important scientist, a woman far ahead of her time.

Find this review on Sonderbooks at: www.sonderbooks.com/Childrens_Nonfiction/girl_who_drew_butterflies.html