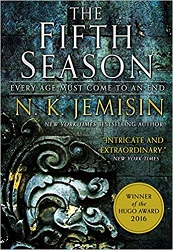 The Broken Earth, Book One

After the Newbery, I was ready to read something completely different. Both my adult children highly recommended the Broken Earth trilogy. They told me N. K. Jemisin was the first black woman to win the Hugo – and then the first person to win the Hugo three years in a row – with the books of this trilogy.

Tonight I finished The Fifth Season, and I had to go back to the beginning to see if I understood now what was going on at the start of the book. I think maybe, sort of? I am hoping things will be a bit less murky after book two. Which I am going to read.

This book, like much science fiction, is more cerebral than emotional. The world-building is amazing. We’ve got three plot threads going on, one of them addressing the reader as “you.” You do learn how the three threads are connected before the book ends – but it does end up having you do some rethinking.

The world here is a world that may be ending. They’ve long had “Fifth Seasons” – where ash from a volcano or some other disruption means there is a prolonged winter and little to harvest. They’ve got stonelore to tell them what to do, how to prepare. A new one is beginning, and this may be the worst ever.

This world has orogenes – people who can sense and manipulate the earth. They can raise volcanoes and still earthquakes. Earthquakes that are constantly happening in this world. Orogenes can also kill you by icing you – sucking all the energy out of an area around them and instantly freezing you to death. So they are deeply feared – and kept away from society, trained at the Fulcrum.

There are also Stone Eaters. They seem to be made of stone and can eat stone and move through stone And then there are Guardians, who can neutralize the power of orogenes. Their job is to watch over them. But if you don’t follow the rules, you’re in trouble.

The book follows a woman who was hiding her orogeny and has lost her son, a young girl being taken to the Fulcrum to be trained, and an orogene well along in her training, given a job under a new mentor – where something happens that she can’t explain and changes everything.

I’m still not sure I completely understand all that happened in this book. I need to read on…. How lovely that for once I’m reading a trilogy that’s already completely written!

Go to this book for intricate world-building and mind-blowing ideas. I have a feeling I’ll like it more as I begin to understand more of what’s going on! But I’ve definitely gotten hooked.

Find this review on Sonderbooks at: www.sonderbooks.com/Fiction/fifth_season.html