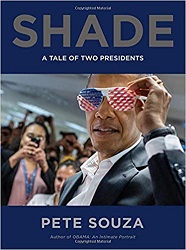 A Tale of Two Presidents

Pete Souza was the official white house photographer when Barack Obama was president and has already published the wonderful book Obama: An Intimate Portrait. In this book, he uses some of the same pictures to throw some shade.

He explains what he’s doing in an introduction. Let’s just say that he was struck by the contrast between things our current president was doing and saying and things a competent president whom he knew well had done. So he began posting photos on Instagram that directly contrasted with things the new president was doing. People loved it, and some said he was “throwing shade,” so he tried to figure out what they meant. Here’s what he says about it:

So, finally, I googled “throwing shade” and Merriam-Webster explained it to me: it’s a “subtle, sneering expression of contempt for or disgust with someone – sometimes verbal, and sometimes not.”

Yup, that’s what I was doing – throwing shade. And I kept it up for the first 500 days of the new administration, and I plan to keep going long after you’ve read this book. My comments are often humorous, and I’d even say they are more or less respectful. They are certainly more respectful than the tweets coming from this president.

I also try to make subtle comments with my Instagram posts without directly revealing what the current president has said or done. Many people tell me they see my posts and then try to find out what they missed in the news.

In this book, I take a turn to full transparency and let it all hang out. In the pages that follow, you will see adaptations of my original posts matched up directly with what inspired them – a presidential tweet and/or the news that caught my attention in the first place. You can call it shade. I just call it the truth.

I hope you laugh, and maybe even cry, as you read this book. During the past 18 months, outrage has bubbled up inside me. I have become more and more appalled at the person that we, with help from Russia, elected to represent our nation. With this book, I’m standing up and shouting out. I can’t be subtle any longer.

Obviously, this is a book for fans of Obama. I loved the book and indeed laughed over it. I managed not to cry – but it does add to my frustration with the present situation to remember how a president should act.

A few examples. On one side of the page there are headlines about Trump’s Muslim Ban. On the opposite page there’s a photo of Obama talking with young refugees at a Dignity for Children Foundation classroom in Malaysia. There are a couple of times with headlines about how Trump got along with foreign leaders contrasted with pictures of Obama with them (both allies and Putin). There’s a headline about Trump denying climate change contrasted with Obama talking with a scientist on the site of a melting glacier in Alaska. There’s a headline with a Trump attack on the media contrasted with a picture of an Obama press conference – lots of smiling faces in that one. A “Fake news” headline from Trump is contrasted with the range of newspapers and news magazines presented in the Obama white house daily.

Our current president has broken norms over and over again – it’s good to be reminded how a president should actually approach the job. To be honest, I think a photographer could have come up with contrasting photos using almost any other president, not just the outstanding one who came just before Trump. May things go back to normal very soon. Here’s hoping.

Meanwhile, you can enjoy reading this book.

Find this review on Sonderbooks at: www.sonderbooks.com/Nonfiction/shade.html