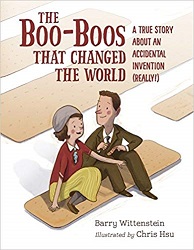 The Boo-Boos That Changed the World

A True Story about an Accidental Invention (Really!)

Here’s a fun picture book that tells about the invention of Band-Aids.

It turns out they were invented by a guy named Earle Dickson who worked for a hospital supply company and whose father was a doctor. But that wasn’t enough. The reason he invented Band-Aids was that he had an accident-prone wife.

When Earle’s wife Josephine cut her fingers, it was hard to wrap the wounds in a way so that she could still use her hands. So Earle thought of attaching a piece of sterile gauze to adhesive tape. Then she could easily tape a strip over her cuts and scrapes.

But that wasn’t the end of the story. They still needed to manufacture the new adhesive bandages and then convince people to buy them.

At first, they sold them in big rolls, and you had to cut off a piece before you could put it on a cut. They were also difficult to manufacture. Even when they got the idea of individually-wrapped bandages, it still took time to catch on.

In fact, it was giving free samples to Boy Scouts and the military fighting overseas during World War II that made Band-Aids a household necessity.

I like the way this picture book looks at the entire process of a relatively simple invention and explains how it was developed in a way that children can understand.

I’m planning to booktalk this book in the elementary schools this summer. It has the hook of being a fun story about something everyone has used, and it also teaches what goes into making an invention popular.

Find this review on Sonderbooks at: www.sonderbooks.com/Childrens_Nonfiction/boo_boos.html