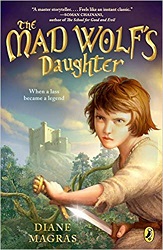 As this book begins, Drest tries to warn her brother and her father that she sees boats coming to their lair, but they’re convinced she’s dreaming. They know different when attackers burst upon them.

Her father, the war band leader, gets her to flee and hide. But she sees him and all her brothers taken away. She is determined to save them – even if it means reviving the knight who got thrown down a cliff by one of the other knights.

This is a wonderful historical fiction novel – set in medieval Scotland about a young girl who’s small but fierce and resourceful. Her brothers have trained her well. But she only has six days to get to the castle to save her family, and her journey is not uneventful.

You come to love Drest’s fierce, fighting spirit, which is tempered by compassion for those who need help.

Here’s where Drest approaches the knight at the base of the cliff:

Tears sprang to Drest’s eyes. “Your toad-witted people took my da and my brothers. And I didn’t throw you down here; one of your own men did.”

The young knight’s voice quivered. “What a filthy lie. Those are my most faithful men.”

His despair gave Drest courage. She crept closer. “Maybe some of them, but not the one who was up on the cliff with you. I watched him fight and push you down here.” The mist was thickening around them. Drest looked back to find the trail. “Do you know where they’ve taken my da?”

The young knight’s eyes widened. “To Faintree Castle. Do you even know who we are?”

“Everything in this part of the lowlands – including this headland – belongs to Faintree Castle.”

“Is that the truth? Strange. I’ve always known that my da owned this headland and all the lowlands.”

That’s only the beginning of Drest’s surprising adventures.

Fair warning is that while this book finishes at a good stopping-place, not everything is resolved, so I trust there will be more adventures to come. But this book has enough to make this lass become a legend.

Find this review on Sonderbooks at: www.sonderbooks.com/Childrens_Fiction/mad_wolfs_daughter.html