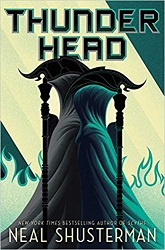 Arc of a Scythe Book 2

This book was a bad choice to bring to Silent Book Club — I wanted to shout when I got to the last page. I did NOT see that coming! (And it’s perfect!) And I doubt that any reader will see it coming, even if I warn you.

But let me back up. This book is a sequel to Scythe. One thing I liked about Scythe was that I wouldn’t have even known it was a Book One if the flap cover hadn’t said so. It wrap ups nicely, and you think good is winning.

Ummm, let’s just say that Good has many setbacks in Book Two.

This series is set in a future earth where mankind has conquered death. They have also eliminated government, and the world is run by the Cloud – which is now known as the Thunderhead. And the Thunderhead is a perfect ruler.

But because it’s not sustainable to have the population keep growing forever, some people need to die. They didn’t want to leave that choice into the hands of a machine, so that’s why the Scythedom was developed. Scythes must hold themselves to high standards and ten commandments. Their responsibility is to glean people and end their lives.

There is strong separation between Scythe and State. So even though the Thunderhead knows something is going terribly wrong with the scythes, it cannot intervene directly.

This book shows that something is indeed going terribly wrong.

I used to tell people that besides apparently having a grim reaper on the cover and being about two teens becoming apprentice scythes, the first book was more thought-provoking than grim. The second book, I’m not going to say that! Some truly horrific things happen in this book, as well as some enormous surprises.

Since I won’t be able to post this review until a year after I write it, maybe the next book will be out and I can finally find out how this all turns out. (If this ends up being longer than a trilogy, I may scream.)

Added in March 2019: Nope, not yet! No next book yet. I want to add that this was probably the best-plotted book I read in 2018. In my opinion, though, it is not a children’s book. Teens will enjoy it, yes, but the book appeals to the part of them that is becoming an adult. The characters have chosen careers (grim ones) and are living on their own or with a mentor. And again, they are dealing with some truly horrific events and choices.

But wow! For young adults and old adults – this series will make you grapple with lots of big and profound life-or-death right-or-wrong questions you might never have even thought to propose before.

Find this review on Sonderbooks at: www.sonderbooks.com/Teens/thunderhead.html