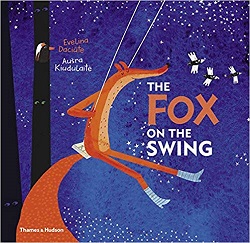 The Fox on the Swing

This picture book is completely bizarre and utterly delightful at the same time. The creators are from Lithuania, and I guessed a European origin before I looked it up, but even in Lithuania, a boy living in a tree and making friends with a fox who swings on a swing about once a week has got to be somewhat unusual.

When I read this, I happened to be gathering books for a story time of Strange Picture Books. This particular book is a little too long to use in story time, but I would love to sit down and read it with a precocious child. And it fits the category. What Strange Picture Books have in common is completely bizarre details accepted as the matter-of-fact truth. There are no real cues to tell the reader that this situation is unusual except the child’s own knowledge of the world.

In this book, a boy named Paul lives in a very large tree with his father and mother. His father is a helicopter pilot, taking off from a platform at the top of the tree. His mother makes orange pottery. And every day, Paul goes to the bakery to get three fresh bread rolls. (Ah! That’s one thing that tipped me off this book is from Europe.)

What Paul liked best was to take the shortest route to the bakery and the long way home. Walking the same way twice was a little bit boring, after all.

Much of the charm in this book is in the details and the illustrations. Here’s what happens on the way home:

Paul always kept his eyes wide open as he walked home. He didn’t want to miss a thing. He saw strangely shaped stones, fascinating twisted roots, fancy birds that had escaped from the zoo, and puddles that glistened on the ground.

That page shows many birds holding signs that say things like, “No to zoos!” “No to cages!” “Free the birds!” “Parrots for peace!” “Freedom!” and “No, no no!”

But the thing that Paul liked most of all was the old swing in the park. Not to swing on himself, but because there was a fox who liked to curl up and sleep on the seat of the swing. Paul didn’t see her there every day. Maybe about once a week.

Then one day, the fox is swinging on the swing!

Then she stopped, sniffed at the air, looked Paul in the eye and said: “Being generous is like an ocean. Would you like to be a drop in that ocean?”

“Then give me one of your rolls,” the fox said.

So begins the friendship of Paul and the fox on the swing. The fox had a grandmother who was a wise old fox, and she likes to tell strange stories and give wise advice. Sometimes the fox would be in a bad mood, and sometimes she would not.

One day, when the fox was in a very good mood, she said, “The best thing to do is just keep on swinging.”

Then she explained that the happiest things in the world are orange.

“Happiness is a fox on a swing and a big orange orange!” she yelled as the swing carried her high into the sky. “Happiness is carrot cake, goldfish, marmalade, and trees in autumn!”

So Paul must cope with having to leave his best friend.

But this is not really a book about dealing with loss. Because, after some time, things turn out very nice indeed.

This book reminds me of The Little Prince with its philosophy and childlike matter-of-factness about bizarre details. And a wise fox! It would be a delight to read this book with a child. (I’m sure they will notice many things in the illustrations.) And it certainly helps anyone who reads it notice things around them that bring happiness.

Find this review on Sonderbooks at: www.sonderbooks.com/Picture_Books/fox_on_the_swing.html