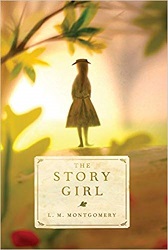 It’s really happening! My two childhood friends and I are going to Prince Edward Island this coming September, during the week when all three of us are 55 years old. We first conceived this trip when we were 50, but decided to put it off – and now our rooms are booked!

And this time I’m getting serious about rereading my L. M. Montgomery books. This time, I decided to reread them in the order they were published. I have already reread Anne of Green Gables, Anne of Avonlea, and Kilmeny of the Orchard. Now it was time for The Story Girl.

The Story Girl is about the children of the village of Carlisle on Prince Edward Island. It’s told from the perspective of Beverley King, looking back as an old man on the joys they had as children.

[Incidentally, I have learned from L. M. Montgomery’s books that if a man’s name ends in Y, women will eventually steal it. All of these names appear in her books as names for boys: Beverley, Shirley, Lindsay, and Hillary.]

When I was a young adult reading L. M. Montgomery’s books, I preferred the ones that had romance. But now as I myself am “old” (by her standards – I’ve been shocked that “old” characters in her books are only in their forties!) – I’m reading these books with my own nostalgia.

The Story Girl was one of L. M. Montgomery’s own favorites. I think she liked to think of herself as a sort of Sara Stanley, who was called by everyone “the Story Girl.”

Maud Montgomery did her apprenticeship writing short stories and selling them to magazines. I think as a consequence, short stories are her natural form. And she does a nice job of weaving them through this book, with the Story Girl telling them family stories about objects in their home or stories about people from their village or fairy tales about something that happened.

There’s a lot that’s old-fashioned in this book. Sara and her cousin Felicity are fourteen and twelve years old, but they seem younger by today’s standards. And they have different abilities from children today, with Felicity completely able to run the house while the grown-ups are away for a week, including having baked all afternoon so their pantry is “well stocked with biscuits, cookies, cakes, and pies,” so that she is able to entertain an influx of visitors, as is proper.

Cecily set the table, and the Story Girl waited on it and washed all the dishes afterwards. But all the blushing honours fell to Felicity, who received so many compliments that her airs were quite unbearable for the rest of the week. She presided at the head of the table with as much grace and dignity as if she had been five times twelve years old and seemed to know by instinct just who took sugar and who did not. She was flushed with excitement and pleasure, and was so pretty that I could hardly eat for looking at her – which is the highest compliment in a boy’s power to pay.

I was amused how often the episodes between the children had to do with church and the Bible. When the paper reports that someone in the States has said the day and time for Judgment Day, they all get into a tizzy. Another time, they have a preaching contest (boys only, of course) with very amusing results. And there’s an incident with a picture of God and the question of praying for their cat to get well. Did prayer end up healing him – or was it their request to the local woman they all think is a witch?

All in all, it was delightful to be transported back into L. M. Montgomery’s world. This one doesn’t have romance, but it does have two other things L. M. Montgomery did exceptionally well: short stories plus the escapades of children.

Find this review on Sonderbooks at: www.sonderbooks.com/Childrens_Fiction/story_girl.html