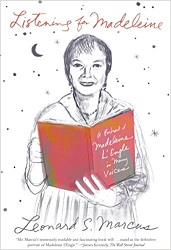 A Portrait of Madeleine L’Engle in Many Voices

I’ve long been a fan of Madeleine L’Engle’s work, both fiction and nonfiction, both for children and adults. This book is an exploration of her life, composed of interviews with 51 people who knew her. Some only met her once or twice, but others knew her from childhood.

Here’s an overview from the Introduction, which also presented an outline of Madeleine L’Engle’s life story:

In pursuit of a fully rounded portrait of Madeleine L’Engle from living memory, it seemed essential to hear not only from as many as possible of the people who knew her most intimately but also from some whose more fleeting encounters were representative of those of the thousands of students, teachers, librarians, aspiring writers, neighbors, and others who crossed her path in the course of a richly complex life enacted largely in public view.

The portrait that emerges is – and was bound to be – impressionistic in nature. The principal reason for this is that L’Engle casually departmentalized her vast and densely populated universe. People important to her in one sphere of her life typically did not meet those important to her in the others. The inveterate fan and sometime practitioner of the mystery genre knew very well how to scatter the clues to her own story, an overwhelmingly admirable tale that at times, however, bore scant resemblance to the placid domestic idyll of A Circle of Quiet and its sequels, as a controversial profile of L’Engle published in The New Yorker, in April 2004, made clear. Some of the most deep-seated family conflicts also proved to be among the longest lived. Regrettably, L’Engle’s adopted daughter, Maria, was among the few people approached about an interview for this book who declined.

Most of the interviews are only a few pages. They’re divided into sections by the way the interviewee encountered Madeleine: Madeleine in the Making, Writer, Matriarch, Mentor, Friend, and Icon.

The result is indeed impressionistic, but you’re left with what feels like an exquisitely detailed portrait of a remarkable woman.

I highly recommend this book to all Madeleine L’Engle fans.

Find this review on Sonderbooks at: www.sonderbooks.com/Nonfiction/listening_for_madeleine.html