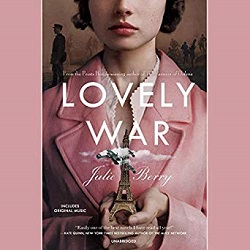 This audiobook is an epic novel and an astonishingly wonderful production. As you can tell by all the distinguished readers (including a couple of my favorite narrators), they use different readers for different people telling the story.

This book is told by the gods. You see, in 1942 Paris, the god Hephaestus has caught his wife Aphrodite, the goddess of beauty, cheating with his brother Aries, the god of war. As her defense, Aphrodite tells the gods that mortals know more about love than gods do – and she gives an example, telling the story of two mortal couples who fell in love during the Great War, Hazel and James (both British), and Colette (Belgian) and Aubrey (African American).

The couples came together because of War and because of Music – so Aries and Apollo help tell the story. But Death also comes into the story, so Hades has parts to tell as well.

The story is epic. Hazel meets James a week before he ships out to fight. She volunteers with the YMCA and goes to France, where she meets Colette. Colette has already suffered the loss of her entire family and the boy she loved at the hands of the Germans. But Hazel plays piano and Colette sings, and while playing in the YMCA relief hut, they meet Aubrey, the king of ragtime.

There’s an extended author’s note at the end, because she did a lot of research. When she spoke about how moved she was viewing the World War I memorials in Europe, I was instantly reminded of my own visit to the museum at Verdun and how it utterly shook me. But she went even more places than I did.

The officers in the story were people who actually lived and battles are portrayed that they actually fought. Aubrey encounters horrible racism overseas from Americans but not much at all from the French – matching the actual experiences of American soldiers in World War I.

The story itself is lovely and will wind itself into your heart. I also enjoyed the playful and unusual frame of a story being told by gods. I’m already going to say that I hope this audiobook wins this year’s Odyssey Award for the best children’s or young adult audiobook production. It gives an amazing listening experience.

Find this review on Sonderbooks at: www.sonderbooks.com/Teens/lovely_war.html