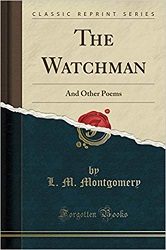 The Watchman and Other Poems

I’m rereading my L. M. Montgomery books in publication order, but never had found a copy of her book of poems, the eighth book she published. I found it in a reprint on Amazon and rectified that omission.

I am probably not the best audience for poetry. And these are old-fashioned in style, often using archaic language. They all rhyme, and many of the rhymes seem trite.

The story goes that when Maud Montgomery was a girl, she tried her hand at unrhymed poetry and read an example to her father. He said it didn’t sound like poetry.

And she wrote rhymed poetry forever after.

The poems I liked best were the poems that tell a story. Perhaps that’s because what L. M. Montgomery is good at is telling stories. The title poem, “The Watchman,” was about one of the soldiers guarding Jesus’ tomb when he was resurrected. Another poem, “If Mary Had Known,” told about the very bad and very good things her son would go through.

L. M. Montgomery likely suffered from bipolar disorder, so that gave a little extra light on “The Choice” – where she tells Life that she would rather “sound thy deeps and reach thy highest passion, With thy delight and with thy suffering rife” than have a boring life. “Wan peace, uncolored days, were a poor favor; To lack great pain and love were to lack savor.”

Another one I liked was “To My Enemy.” In it, she thanks not her friend, but her enemy for spurring her to do great things.

I had not scaled such weary heights
But that I held thy scorn in fear,
And never keenest lure might match
The subtle goading of thy sneer.

Thine anger struck from me a fire
That purged all dull content away,
Our mortal strife to me has been
Unflagging spur from day to day.

It’s possible that I will appreciate the poems about the woods and the sea more after I have actually visited Prince Edward Island. I think I’d better go find out!

Find this review on Sonderbooks at: www.sonderbooks.com/Nonfiction/watchman.html