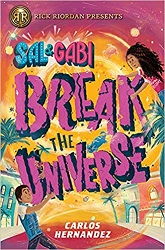 This is the first one of the “Rick Riordan Presents” imprint that I’ve read that doesn’t feel like Rick Riordan could have written it if he belonged to that culture. Yes, it’s an “Own Voices” book from Cuban-American culture. But it doesn’t follow the formula of kid-finds-out-mythological-characters-are-real-and-they-are-part-of-it. Instead, this is science fiction involving parallel universes, a kid who is able to open windows between universes, and his father who studies “calamity physics.”

Now, I have to say that I think the “science” in this book is silly and bogus. There’s hand-waving that goes on about how Sal is able to open windows between universes and pseudoscience about “calamitrons” that result. Also, the thing that happened at the end didn’t make sense to me.

I’ve said before that if a novel makes too much of alternate universes, we start asking, why then are we hearing the story of this particular universe, when a story exists where the characters make different choices? To me, it cheapens the importance of those choices.

However, that said, I loved this book! The characters, especially Sal and Gabi, are completely delightful. I love that Sal, who can open windows between universes and bring things through, is a showman and a magician. What a great trick – to bring a dead chicken from an alternate universe and then make it disappear without a trace!

Right at the start, Sal stands up to a bully by putting a dead chicken in his locker. He does it with flare, and later the evidence disappears. Gabi’s a friend of the bully, and we soon learn that she’s not the sort of person who’s going to let a mystery like that stand.

Sal and Gabi attend an Arts Magnet School – and it makes me wish such a school existed. The teachers and principal are reasonable and try to be fair. Sal’s also got diabetes, and dealing with that is a nice underlying realistic piece of the plot.

There’s a spot where Sal scares Gabi much more thoroughly than he meant to – and he apologizes beautifully. That’s where I thought, What a wonderful kid! But then later in the book, we see an alternate reality Sal whose mother never died of diabetes, and that Sal isn’t nearly so thoughtful. I like that nod to the way difficult experiences make us grow. I could believe that Sal was so aware of others’ feelings because of what he’d been through.

And let’s face it, the interaction between universes was so much fun, I was willing to suspend my disbelief. A chicken in a bully’s locker. Sal’s dead mother coming from another universe and thinking she’s still married to his Papi. A Calamitron-scanner with artificial intelligence and a personality. A lie detector using brain science that Sal turns into a performance.

So maybe the “science” is very hand-wavy. But as a novel about people – people interacting with grace, performing, and dealing with the hard parts of life – this novel shines. I agree with the blurb on the back by William Alexander, “filled to the brim with a fiercely unstoppable joy.”

Find this review on Sonderbooks at: www.sonderbooks.com/Childrens_Fiction/sal_and_gabi_break_the_universe.html