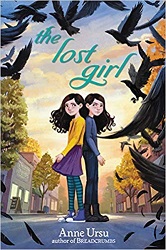 The Lost Girl is about identical twins, Lark and Iris, and the story is told from Iris’s perspective. She’s always taken care of her sister, and they can tap messages to each other in a secret code. But now as they’re starting fifth grade, their parents are letting them be assigned to different classes.

The girls are identical but not the same.

Lark always knew when their parents had been arguing. Lark could tell you what the consequences for stealing were in different fairy tales, and that the best bad guys had interesting backstories. Lark always knew which books she wanted to check out from the library next.

This is the way it was.

No, they were not the same. But yes, they were twin sisters, and for Iris and Lark that meant something, something far deeper than what lay at the surface. They each knew the monsters that haunted the shadowy parts of the other’s mind, and they knew how to fight those monsters.

The school year does not get off to a good start with the girls having to be in different classes. Lark gets laughed at, and she’s in the class with the bully. Iris doesn’t even know who she is without Lark to defend. After school, Lark goes to art class, and Iris gets tricked into going to an all-girl group at the library called Camp Awesome.

After Camp Awesome is done, Lark is supposed to bike home, but sometimes she talks to the strange man at the new antiques store with an unusual sign in front. He puts simple science experiments out on the shop counter, and he says that they are magic. He’s looking for someone named Alice. He lets Iris look at books in his shop, and she finds one with Alice’s writing in it, saying things like “Magic has a cost.”

As the book goes on, Iris feels like she’s losing herself. Who is she without Lark? She starts keeping secrets from Lark. She doesn’t mean to. But maybe Lark is better off without her. What is going on?

This is a story of a sign and a store. Of a key. Of crows and shiny things. Of magic. Of bad decisions made from good intentions. Of bad guys with bad intentions. Of collective nouns, fairy tales, and backstories.

But most of all this is a story of the two sisters, and what they did when the monsters really came.

This is a story about the power of having a flock.

Find this review on Sonderbooks at: www.sonderbooks.com/Childrens_Fiction/lost_girl.html