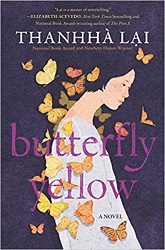 Butterfly Yellow is set in summer 1981 in Texas, about a girl who has survived a harrowing journey from Viet Nam, including a traumatic journey on a boat where most of the other passengers, including her mother, died or were killed by pirates.

Now Hang is in Texas, staying with her uncle, who got to America before the war. But Hang is on a mission to find her brother, who was taken away from her six years ago, when he was five years old and she was twelve and tried to carry out a scheme.

In the final days of the war in April 1975, Hang thought she was so clever, devising a way to flee while her family strategized and worried. Every day newspapers printed stories about Americans panicking to save hundreds of orphans. There was even an official name, Operation Babylift. She assumed she and her brother would go first, then somehow her family would join them in America. But in line at the airport she was rejected, a twelve-year-old passing as eight. Linh was five, three to foreign eyes, just young enough to be accepted as an orphan. Hang saw little Linh thrashing as he was carried into a Pan Am.

By the time her brother was ripped from her, nobody cared to hear why she lied. With so many scrambling to flee before the victorious Communists marched in, one more screaming child was just that. An American volunteer with puffy, sweaty hands must have felt sorry for her. He pressed a card into her palm as he pushed her away from the ladder. Sun rays radiated through each strand of his mango-colored hair. She had to stop an impulse to extinguish the fiery puff of gold threads on his head. He was the last to board. Hang screamed until the Pan Am blended into the sky and left a long loose-curl cloud. For hours, until dusk enveloped her and mosquitoes chased her home, she focused skyward and pleaded for forgiveness. When she opened her palm, the card had disintegrated except for one clue: 405 Mesquite Street, Amarillo, Texas.

Hang’s mission, her one purpose now she is in America is to find her brother. That mission starts out on a bus, but when the bus’s motion, reminding her of the escape boat, makes her sick, the bus leaves without her. Her mission ends up entwining her fate with that of LeeRoy, a boy who is also eighteen and has left his home for the summer on a mission to ride in rodeos and be a cowboy.

When Hang does find her brother, he doesn’t remember her. And his American mother wants Hang nowhere near him. But Hang is going to find a way to stay as close as she can – and a lot of things happen to Hang, LeeRoy and Linh that eventful summer in Texas.

This book is beautifully written, from several different perspectives. One thing I love about it is how when Hang speaks in English, the phonetic spelling is given – but phonetic from the perspective of someone from Viet Nam, full of diacritic marks, and not using the same phonetics as an English-speaking person would use. The reader has to learn how to understand Hang and gradually figure out what she is trying to say. When she thinks or writes in Vietnamese, she is completely fluent, so the reader understands the difficulty of trying to communicate in a foreign language.

We gradually learn about the trauma Hang survived, both in Viet Nam and as she escaped from Viet Nam. It’s horrific, and explains why she covers herself up and hides even in the Texas summer and doesn’t even think of trying to look pretty.

This is a book of cross-cultural understanding, as well as a book of love and healing.

Find this review on Sonderbooks at: www.sonderbooks.com/Teens/butterfly_yellow.html