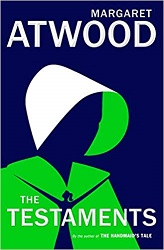 The Testaments is a sequel to The Handmaid’s Tale, which I’ve actually never read. (Though I remember it was a Book of the Month Club selection long ago when I was a member. At the time, I didn’t like books where religious people were the villains.) I have watched the TV series, though, on library DVDs. Normally, I wouldn’t let that substitute for reading a book, but while the series was riveting, it’s an extremely unpleasant story, and I didn’t actually want to absorb myself in it again. I did have enough information to completely understand what was going on in this sequel. This book will be more enjoyable if you’ve read the original book or watched the series, though.

This book is told from three perspectives, all three writing about what happened in the past (which is why it’s called The Testaments). One perspective is that of Aunt Lydia, an important person in the administration of Gilead, in charge of women’s matters. Along the way, we learn about Aunt Lydia’s background and how she came to power.

The other two perspectives are the daughters of Jude, the Handmaid who tells the story in the first book. (They don’t tell you that right away, but it’s not difficult to figure out.) One of them was smuggled out of Gilead as a baby. She only finds out about her background when the couple she thought were her parents were killed by a bomb. The other was the little girl taken from Jude when she was first captured while fleeing Gilead. She, too, must learn that those she thinks are her parents are not really her parents. In fact, when her “mother” dies and her “father” takes a new wife, the stepmother wants her out of the house, so plans to marry her off at thirteen.

I do have some arguments with the idea that Gilead would have gotten enough people behind it to pull off a new country and a new repressive government. But that’s simply the assumption here. In this book, the girls grow to be young adults, and the reader learns both what it’s like to grow up in Gilead and what happened to the characters after The Handmaid’s Tale.

Margaret Atwood’s prose is riveting. I began reading this book on a sick day. I did two things that day – slept and read. And I didn’t go to sleep for the night until I’d finished the book. Even with three perspectives, the plot doesn’t lag at any point. Highly recommended.

Find this review on Sonderbooks at: www.sonderbooks.com/Fiction/testaments.html