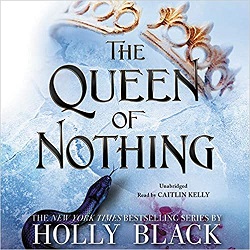 The Queen of Nothing

The Folk of the Air trilogy is so good! The Queen of Nothing is the third and final volume of the trilogy. The whole series is full of twists and turns and reversals. Each book has multiple moments where you’re not sure how the main character is even going to survive, let alone triumph. The books are full of assassinations and betrayals and political intrigue, and each book is more intense than the one before. I listened to this audiobook on my commute, and it’s one of those that once I got somewhere near the end, I had to bring the final CD inside the house to listen because I couldn’t bear to stop.

Jude has been brought up in Faerie after the redcap former husband of her mother killed both her mother and father, but pledged to take care of her and her twin sister. This adopted father taught her to be a deadly fighter, but at the start of this book, he’s fighting on the other side.

I don’t want to say much about how the book opens, because it gives away some of what went before. (And, yes, you must read these books in order.) I’ll just say that Jude is in exile in the mortal world. Her twin sister, Taryn, convinces Jude to go into Faerie “just for a few hours” pretending to be Taryn, so she can truthfully testify in the case of Taryn’s murdered husband.

Not surprisingly, things do not go as planned, and Jude is trapped in Faerie with people planning to make war against the High King of Faerie. Perhaps Jude can get information to use against them….

Twists and turns and treacheries follow. Holly Black is unsurpassed in her ability to surprise and shock her readers. But she is also able to delight us.

It is just as well I listened to this book, because in print form I don’t think I would have been able to stop. This way the enjoyment lasted longer. As it is, this book is responsible for me not remembering where I was going on an evening when I planned to go to choir rehearsal after work.

Find this review on Sonderbooks at: www.sonderbooks.com/Teens/queen_of_nothing.html