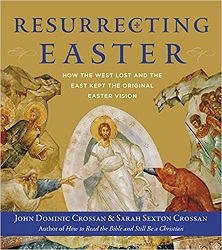 I’d originally checked this book out and tried to read it in 2018, but eventually gave up. (I was busy with Newbery reading, anyway.) But after Richard Rohr referred to it in The Universal Christ, I checked it out again and this time made a concentrated effort to read the whole thing.

It’s a very academic work, so that’s why it’s hard to get through, but becomes fascinating the more you pay attention to what the authors are saying. It’s a book about early Christian art portraying the Resurrection of Christ – and how it developed in two different directions.

But instead of just talking about it, the authors show you exactly what they’re talking about. They have traveled the world to collect photos of the art, and they’re on display in color on the large pages of this beautiful book. The authors also tell about their travels to old churches with mosaics and to monasteries with old manuscripts. We come to understand the timeline as they carefully date each picture and show how the iconography progressed.

As they lay out the two categories of images of Christ’s Resurrection – Individual and Universal, they also show us the different types within each category, and show how the types developed.

Here’s how the authors explain the Universal Resurrection Tradition in their Prologue:

Instead of arising alone, Christ raises all of humanity with him. He reaches out toward Adam and Eve, the biblical parents and symbols for humanity itself, raises them up, and leads them out of Hades, the prison of death.

One is that the individual version becomes, by the second millennium, the official Easter icon of Western Christianity. As such, it is the one we know best as Westerners, and we may even presume, mistaking part for whole, that it is the only one present throughout Christian history. In this book, therefore, the emphasis is on universal over individual iconography for Christ’s Resurrection as remedial education for Western Christians. During the last fifteen years, it has been precisely that for us.

Another – and much more important – reason for emphasizing the universal resurrection tradition is based on these two final questions as the fourth and fifth themes of Resurrecting Easter. We emphasize them here and now, and we ask you to keep them in mind throughout the book, but we will only answer them at the very end of the book.

First, is the individual or universal vision in closer continuity with the New Testament’s understanding of “Resurrection” and in better conformity with the Gospels’ conception of Easter? For example, when Paul speaks of Christ’s Resurrection, is he imagining it as individual or universal? Or again, when 1 Corinthians 15:20 and Matthew 27:52 refer, using the same Greek term, to the resurrection of “those who have fallen asleep,” who exactly are those sleepers?

Second, whether you understand Christ’s Resurrection as a historical event or a theological interpretation; whether you accept it as myth or parable, symbol or metaphor; and whether you accept it religiously or reject it absolutely, what does it claim and what does that mean? How can someone or something that happens once at a certain time and in a specific place influence or change the whole human race – not just forward to the end of time, but backward to its start?…

What does it mean, whether or not it is credible, to depict Christ’s Resurrection as humanity’s liberation from death – all humanity, past, present and future?

So that gives you a feel for what’s explored in this book. Besides being a beautifully photographed book, it’s a major work of scholarship, gathering images made of Christ’s Resurrection from as early as the 700s, and placing them in chronological order and historical context.

As a universalist myself, I wouldn’t have minded if the authors had drawn more conclusions. But I personally took comfort in this confirmation that my belief that Christ redeemed all of humanity and “as in Adam all die, so in Christ shall all be made alive” — that this belief is bolstered by Christian art created centuries ago. Beautiful and inspiring.

Find this review on Sonderbooks at: www.sonderbooks.com/Nonfiction/resurrecting_easter.html