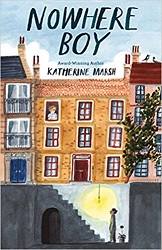 Wow. This timely book shines a light on acting with compassion and asks when is it right to break rules for the sake of those in need.

The book opens in 2015 with Ahmed a refugee from Syria on an overcrowded dinghy in the Aegean Sea. His father is the only member of his family left alive, and when the boat is in danger of sinking, his father is the first one to jump into the water to pull the boat and keep it moving. This works for a long time until the wind picks up and the rope breaks and his father is lost.

The next chapter shows us Max Howard, whose family has moved to Brussels, Belgium, for his father to work at NATO Headquarters. Max has just learned that his parents are sending him to the local Belgian school to repeat sixth grade and focus on learning French. He is not happy about this decision, made without consulting him. His older sister is going to an American high school, but Max has to go to the school right around the corner.

The new school doesn’t go well. He doesn’t understand a lot of things, including writing with a fountain pen and spelling tests in French.

But the two stories collide after Ahmed, who has come to a refugee encampment in the middle of Brussels, tries to get a ride with a smuggler to Calais, but ends up needing to jump out of the van – without his phone or any money. He ends up hiding in the wine cellar in the back of the basement in Max’s family’s home. One thing leads to another… and he stays.

When Max eventually finds Ahmed, again one thing leads to another, and they develop a scheme to enroll Ahmed at the same school Max attends. I like the way that helping Ahmed means Max has to deal with the bully who’s been bothering him.

I love the way Max was inspired by Albert Jonnart, the man his street was named after – who lived there during World War II and ended up dying because he hid a Jewish boy. But the boy got away, fleeing across the rooftops. Now Max is hiding just one person himself.

The book is based on the author’s own experience living in Brussels on the same street as Max. The setting portrays the fear and mistrust of Muslim refugees and the terror attacks that happened in Paris and Brussels at that time. In that context, it’s all the harder to protect Ahmed, but Max and his new friends from school learn to see him as the kind person he is.

I love the message of this book and the gripping story. As unlikely as it sounds on the surface, the author made me believe this could have actually happened. I’m sure that the many details from her own and her children’s time in Brussels help give it the ring of truth. The fact that I have lived in Europe myself made it all sound very familiar. I also enjoy the way the book challenges your thinking and makes you ask what you would be willing to do in order to show kindness, even to just one person.

Find this review on Sonderbooks at: www.sonderbooks.com/Childrens_Fiction/nowhere_boy.html