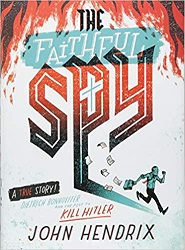 Dietrich Bonhoeffer and the Plot to Kill Hitler

This book isn’t quite a graphic novel – but every page is covered with art and the text is arranged on the art. Some pages do have panels and/or speech bubbles, but most just have an arrangement of text. There are many diagrams and some maps, and every spread has some kind of graphic element.

The story is true. This book tells about a German pastor, Dietrich Bonhoeffer, and his spiritual journey, which eventually led him to get involved in a conspiracy to assassinate Adolf Hitler.

The book also explains the rise of Hitler in an easy-to-understand way. In fact, I feel like I understand it much better than before. I hadn’t put it all together and understood that he took power completely legally and how he pulled that off.

A really striking part was when Dietrich went to seminary in New York City in 1930 and became close friends with a black man. He did some traveling in the South and was appalled when he saw how Blacks were treated, even by pastors. This part was chilling:

But there was something oddly familiar about what he was seeing. It reminded him of the rhetoric of that young nationalist upstart, Adolf Hitler, and his Nazi party, who had tried to seize control of the government a few years earlier.

It was, of course, nothing to the level of what was happening in the United States.

To think that something like this kind of repulsive segregation could come to his Germany was impossible.

But of course it did come, and Dietrich became part of the “Confessing Church” – the first public religious opposition to Nazi policies of discrimination. He even opened his own rebel seminary, which operated under the radar as long as they could.

Another striking moment in the book was that Dietrich and a friend went to visit Martin Niemöller just minutes after he’d been arrested – and were taken into custody, but released that night. This is striking because Martin Niemöller was the one who wrote:

First they came for the socialists,
and I did not speak out –
because I was not a socialist.

Then they came for the Jews,
and I did not speak out –
because I was not a Jew.

Then they came for me
and there was no one left
to speak for me.

Honestly, this book was hard to read in September 2018! It wrestles with how a Christian should act under a corrupt regime. What should they do? How can they simply stand by? Is speaking up enough? What if speaking up brings danger to your loved ones and relatives?

Dietrich had to really wrestle with himself to join the group (composed of some relatives high in the military) who were plotting Hitler’s assassination. They made three attempts – and were very close to success each time. And it feels strange as you’re reading this book to wish that the assassinations had worked!

Dietrich also was a spy. He was supposedly a spy for the Abwehr, but was actually working as a double agent, trying to get some foreign support for the group planning the assassination.

There were times during the war and just before the war when Dietrich had a chance to get out of Germany, including a chance to escape after he’d been arrested and was in prison. But for the sake of his country, which needed people working to do what’s right, and for the sake of his loved ones, who would be sure to suffer if he escaped, Dietrich stayed until the end. He was killed just before the end of the war.

It’s all very dramatic and thought-provoking and laid out in a visual way, making it easier to understand.

Because of the heavy nature of the topic, this is probably more for high school students. But since it’s in such a visual format, some middle school kids will want to read it, too. I highly recommend it for adults as well. I feel much more knowledgeable about World War II and the rise of Hitler than I did before I read it. And I’m thinking hard about what a Christian should do when they see their government pursuing evil policies, infiltrating the church, and making people suffer.

Find this review on Sonderbooks at: www.sonderbooks.com/Childrens_Nonfiction/faithful_spy.html