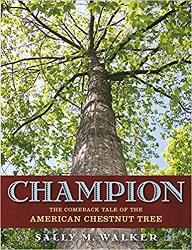 The Comeback Tale of the American Chestnut Tree

I’m not sure when I heard that American chestnut trees had all died off, but I know I heard it as a regrettable fact.

This book says that isn’t actually true. Scientists are using a three-pronged approach to bringing back the American chestnut tree.

First, we learn what happened. A mysterious blight hit the magnificent trees in 1904 in New York, killing them quickly.

It took some work, but scientists determined that a fungus was causing the problem. Finding a way to fight the fungus proved to be very difficult. By 1940, nearly four billion American chestnut trees had died.

However – there’s still some hope.

The roots of many American chestnut trees are still living beneath the soil. Certain microbes in the soil stop the blight fungus from invading the buried roots. The healthy roots continually send up new sprouts that ring the lifeless stump. Each sprout develops its own root system and becomes a sapling. But its reprieve from the blight is only temporary. The sapling grows for 5 to 10 years, until eventually the blight kills it.

However – those still-alive trees give scientists something to work with.

There are currently three approaches being used to try to bring back the American chestnut tree. One is weakening the blight – a virus was found in Europe that attacks the fungus that causes the blight and makes it weaker, so that trees can survive its attacks. Scientists are working with this virus and inoculating trees.

The final approach involves genetically modifying the trees’ DNA with a blight-resistant gene from wheat. However, genetic engineering is highly regulated, so there will be many tests the resulting plants must undergo before they can even be allowed to propagate in the wild.

It’s all very interesting, real-life science. Because trees are slow-growing, it all takes years, but maybe our grandchildren will once again be able to find forests of American chestnut trees.

There’s plenty of back matter in this book, including four appendices about side stories. I liked Appendix B where they tested whether squirrels like the taste of the new chestnuts and would gather them. Appendix C talks about ways children and classrooms can help the effort.

Find this review on Sonderbooks at: www.sonderbooks.com/Childrens_Nonfiction/champion.html